Posted by hzicko on Tuesday, 28 January 2014 in Water Conservation 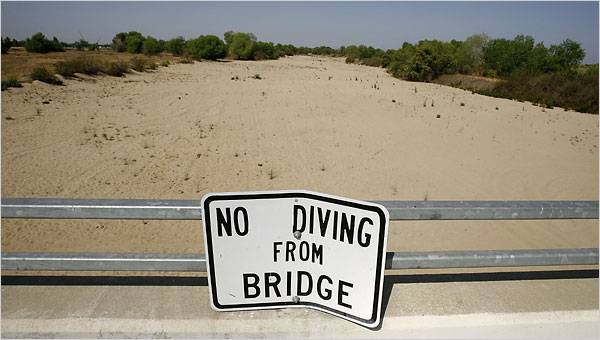 As California's drought deepens, 17 communities across the state are in danger of running out of water within 60 to 120 days, state officials said Tuesday.

In some communities, wells are running dry. In others, reservoirs are nearly empty. Some have long-running problems that predate the drought.

The water systems, all in rural areas, serve from 39 to 11,000 residents. They range from the tiny Lompico County Water District in Santa Cruz County to districts that serve the cities of Healdsburg and Cloverdale in Sonoma County.

And it could get a lot worse.

"As the drought goes on, there will be more that probably show up on the list," said Dave Mazzera, acting drinking-water division chief for the state Department of Public Health.

Most of the affected water districts have so few customers that they can't charge enough money to pay for backup water supplies or repair failing equipment, leaving them more vulnerable to drought than large urban areas.

The state health department compiled the list after surveying the more than 3,000 water agencies in California last week. The list will be updated weekly, Mazzera said.

State health officials are in discussion with leaders of other agencies, including the state Office of Emergency Services and the Federal Emergency Management Agency, to work on immediate solutions, he added. Those could include everything from trucking in water to the health department providing emergency funds for drilling new wells or connecting faltering systems to other water systems.

A similar list of vulnerable communities was compiled during California's last drought, which lasted from 2007 to 2009. But the current drought is more severe. Less rain fell in 2013 than in any year since California became a state in 1850.

Even though some rain is forecast for Thursday, major storms are desperately needed this winter and spring to replenish depleted reservoirs, rivers and the Sierra Nevada snowpack -- which on Tuesday stood at 14 percent of normal.

"This is a statewide drought. This is a serious drought," Bill Croyle, director of the state Drought Task Force, said Thursday. "It's all hands on deck."

Croyle, an official with the state Department of Water Resources, made his remarks at a meeting of the Delta Stewardship Council, a state board of water experts.

Asked by board member Hank Nordhoff, a San Diego businessman, where the water will come from to bail out small systems, Croyle said he's working on it.

"You are going to get it wherever you can get it," he said.

Croyle cited the possibility of new pipe connections to other water systems and trucking in water.

"On the Central Coast, they have in the past looked at desalination," he added. "So if we lose our groundwater and surface water, we are going to go to the ocean. It is going to be expensive, but you bring in mobile plants and fire them up."

Since California's last major drought, which ran from 1987 to 1992, most major urban areas have spent millions of dollars to store water underground, fund conservation programs, build new reservoirs and construct wastewater recycling plants. As a result, their residents are feeling little effect so far.

On Tuesday, the San Francisco Public Utilities Commission announced a voluntary 10 percent cutback for its 2.6 million customers in San Francisco, San Mateo, Santa Clara and Alameda counties. Similarly, the Santa Clara Valley Water District has requested a 10 percent voluntary cutback. Others, like the Contra Costa Water District and the East Bay Municipal Utility District, have not yet asked customers to meet conservation targets.

The story is different in many rural areas.

Lompico County Water District, in the Santa Cruz Mountains near Felton, has long-standing water supply issues and is exploring a possible merger, but so far has been stymied by nearly $3 million in needed upgrades -- a hefty bill for the district's 500 customers.

"We have been unable to take water out of the creek since August and well production is down, and we didn't have that much water to begin with," said Lois Henry, a Lompico water board member.

Henry said she hopes the state comes with funding to help the agency find more reliable water. The district could soon have to begin trucking in water, she said.

"I'm frankly worried," Henry said. "I know people turn their faucet on and say, 'Oh, everything's fine.' And I know it's not."

In Cloverdale, where 9,000 Sonoma County residents draw their water from four wells, low flows in the Russian River prompted the City Council last week to put in place mandatory 25 percent rationing, which includes a ban on lawn watering. The city raised water rates 50 percent to put in two new wells, which should be completed by July, said City Manager Paul Caylor.

"Hopefully," he said, "we'll be able to get through the summer and the development of this project will pay off."