Posted by MarkESackett on Tuesday, 11 February 2014 in Green Design 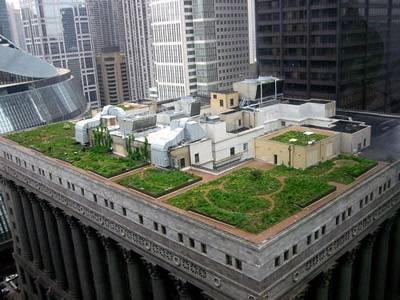 How much can white or green roofs do to fight climate change?

Painting roofs white or covering them with plants could help fight global warming, but they don't offer the same bang for the buck everywhere, says a study Monday of six U.S. "megapolitan" regions.

Cool roofs — painted white or other light colors to reflect sunlight — as well as green roofs have surged in popularity as cities such as New York promote their use and research shows they lower the need for air conditioning. Now comes another federally funded study that reinforces that idea — with caveats.

"Each can completely offset the warming due to urban expansion and can even offset the warming due to greenhouse gas emissions," says lead author Matei Georgescu, a sustainability scientist at Arizona State University. He says cool and green roofs can become an important way to deal with rising temperatures, especially as more Americans live in urban areas that are warmed by asphalt roads and tar roofs.

The study, co-authored by three scientists at the U.S. Environmental Protection Agency, used climate models to look at the potential benefits of cool and green roofs in metropolitan areas that are sprawling into "megapolitan" regions.

"Our work shows that geography matters," Georgescu says. He says cool roofs, which lower a building's temperature year round, offer lesser benefits in Northern than Southern areas. The reason's simple: In Northern cities, the energy savings from less AC use in the summer are offset by more heating requirements in the winter.

"There's always some (energy) savings," he says, but they're smaller in the Chicago/Detroit region and the Mid-Atlantic than in Texas, Arizona, California or Florida. His study finds green roofs don't seem to cool buildings in the winter the way white roofs do, because the addition of water vapor promotes warming — a potential plus for Northern areas. Yet roofs with plants offer less overall cooling than those painted white — a potential downside for Southern areas.

"There are trade-offs that need to be considered," Georgescu says, adding: "We don't yet know enough about the various trade-offs." His study, funded by the National Science Foundation, was published in the prestigious Proceedings of the National Academy of Sciences journal.

"The study is a step in the right direction and is consistent with other studies that suggest that cool roofs can offset localized urban heat island impacts," says Mark Jacobson, an environmental engineering professor at Stanford University. He says, however, it does not show the global impact.

In a 2011 study, Jacobson's computer modeling found that white roofs do cool urban surfaces, but they also exacerbate global warming by reducing cloudiness and heating up particles of soot and dark pollutants that hover in the atmosphere. His study did not include the potential benefit of reduced A/C use.

A 2010 study by DOE-funded Lawrence Berkeley National Laboratory said cool roofs and pavements can not only help cities stay cooler but also cool the world, potentially offsetting the heating effect of up to two years of global carbon emissions. It estimated that converting all eligible urban flat roofs in the tropics and temperate regions to white (and sloped roofs to cool colors) could offset the emissions of 300 million cars for 20 years.

A newer Berkeley Lab study, published online last month, found white roofs are more cost-effective than black or green ones over a 50-year period when installation, maintenance and a building's subsequent energy use are considered. It said they cost $2 less per square foot than black roofs and $9 per square foot less than even the least expensive green roofs.

"White roofs win based on the purely economic factors we included, and black roofs should be phased out," author Arthur Rosenfeld said in releasing the findings. He said white and green roofs do "a good job at cooling the building and cooling the air in the city, but white roofs are three times more effective at countering climate change than green roofs."

He said green roofs, where produce can be grown, offer other benefits such as stormwater management and urban gardening.