Posted by stringer on Friday, 14 February 2014 in Animals 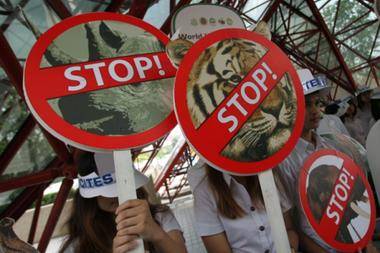 The steps are part of a broad effort announced Tuesday by the White House to stem a global boom in wildlife trafficking that threatens species such as the African elephant and the rhinoceros with extinction.

"Record high demand for wildlife products, coupled with inadequate preventative measures and weak institutions, has resulted in an explosion of illicit trade in wildlife in recent years," President Obama said in a letter accompanying the new National Strategy to Combat Wildlife Trafficking.

"The entire world has a stake in protecting the world's iconic animals, and the United States is strongly committed to meeting its obligation," he wrote.

The U.S. is one of the world's largest markets for illicit animal parts, officials said. Much of the ivory, rhino horn and other animal parts end up in Asia, but they are often processed in the U.S.

The lucrative nature of ivory and horn trades has made poaching widespread in parts of Africa and attracted the involvement of organized crime. The African Wildlife Foundation estimates that about 8% of the remaining 470,000 African elephants are poached every year.

In 2012, poachers killed as many as 35,000 elephants, according to the Interior Department.

Under the existing system, ivory cannot be imported unless it is an antique. Commercial objects made before 1976 and antiques can be exported, and domestic sales are essentially unregulated.

The new measures also will ban the import of antique African elephant ivory and all exports, except antiques.

The administration will ban the resale of elephant ivory across state lines, except antiques. Sales within a state will be prohibited unless the seller can demonstrate an item was lawfully imported before 1990 for African elephants and 1975 for Asian elephants. People can still own ivory and pass heirlooms to descendants, officials said.

Exceptions to the current rules have allowed trade in ivory to flourish in the United States, environmentalists said.

"Because we have an antiquities exemption, everything becomes an antique," said a senior administration official who declined to be identified because he was not authorized to speak for his agency.

To qualify as an antique under the new measures, an item must be more than 100 years old and meet other requirements under the Endangered Species Act, criteria that sellers will have to demonstrate.

The biggest change will be that law enforcement will no longer have to prove that ivory it seized was illicitly acquired. Owners now have the burden of proof to show they legally obtained it. If they imported it before 1990, for example, they will need to produce export permits from the country of origin and a U.S. import permit.

"The United States is addressing its own shortcomings with regard to regulation of wildlife trade and punitive legislation around wildlife crime, and, in so doing, helping to eliminate itself as a source, transit and destination country for illegal wildlife products," said Patrick Bergin, chief executive of the African Wildlife Foundation.

The agency also will limit the ivory trade by capping the number of African elephant trophies that can be imported by each hunter to two a year. Now, there is no cap. It also will restore Endangered Species Act protection, which had been relaxed, to the African elephant.

Some steps will take effect in a few weeks, while others will take longer because public comment is needed.

Sen. Dianne Feinstein (D-Calif.) lauded the administration's tougher approach. She said she would "introduce legislation to enact stronger penalties against wildlife trafficking by making it prosecutable under statutes used for other serious crimes — including drug trafficking, racketeering and money laundering."