Posted by August on Saturday, 22 February 2014 in Animals 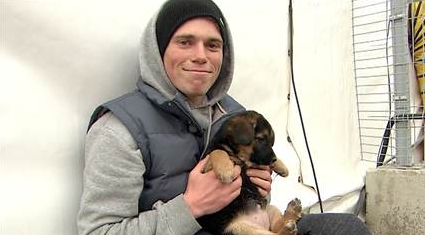 SOCHI, Russia – This is the day when the cold mathematics begins for the U.S. Olympic officials, when they add up the total medals and see if, in grand U-S-A fashion, they can stake claim to No. 1.

It matters to many, for future funding and national pride and all that. But I will always see these Olympics from a different accounting, because the Americans who made the biggest impact in Sochi will not be remembered for the hunks of metal around their necks.

Because, in the 2014 Winter Olympics, the best story was a group of U.S. athletes who decided independently to add another category to the standings:

What resonated most with people? What was a better example of the Olympic spirit – the ability to inspire others and remind the world of the power of humanity – than the snowboarders and skiers and hockey players who used their big moment to save helpless animals?

So atop the standings for me is a snowboarder named Gus Kenworthy. He won a silver medal in slopestyle skiing, a story that would have been forgotten in 15 minutes given the way the Olympic news cycle churns. Then he sent out a simple tweet with a photo of him and four adorable puppies.

Then, he was the face of these Games — on CNN, on the cover of People, getting love on Twitter from Miley Cyrus. His not-so-simple gesture of adopting those pups and their mother – the process is difficult and expensive – touched people in a way beyond any competition.

“I definitely wasn’t trying to come here and be some animal activist or some spokesperson for humanity,” he said. “Just this particular family just touched me. They’re so cute and they need some help.”

Maybe this is just the kind of story that connects with dog lovers. I have a mutt named Maggie, adopted from a shelter, who lets my 2-year-old daughter dress her with Mardi Gras beads. There wasn’t a photo of an athlete with a stray, shared through social media, that didn’t make me smile.

A USOC spokesman made a point at its press conference that people interested in adopting their own pet should visit their own local shelters, and, of course, he is right. We have plenty of dogs looking for homes in the United States.

Still: It was impossible to come here and not encounter the Strays of Sochi, as they were known. They were at every bus stop, every media village, even inside the “Ring of Steel” near the venues. It was always reassuring to see them, given the headlines leading into the Games.

There were stories leading into the Games about extermination crews trying to round them up, lest they shine a negative light on Vladimir Putin’s $51 billion Olympic investment. The backlash from those reports led the IOC to respond that only sick dogs were being killed while the rest were relocated, but like nearly everything here, no one knows the truth.

Animal activists smuggled dogs out in the dead of the night. They wondered, not what would happen to the dogs while the spotlight of the world was on Sochi, but in the weeks and months later.

So a few athletes did something. Snowboarder Lindsay Jacobellis failed to win a medal, but she brought home a mutt. Hockey player David Backes lost a heartbreaker against Canada in the semifinals, but he and a few teammates, along with their wives, were working out logistics to bring dogs home.

“Landed in Denver and enjoying a bone on my layover #Sochi #puppy #usa #home... thanks for everything,” Jacobellis tweeted, with a photo of the pup gnawing on a bone on the airport floor.

All of this attention, humane society officials say, only brings more awareness to the stray dog issues.

“Compassion has no borders,” Angi Metler, executive director of the Animal Protection League of New Jersey, said over the phone. “The first choice is to go to your local shelter (if you want to adopt a pet). But if you bring these images home, it will help find homes for animals in New Jersey.”

So, in the overall medal standings, Team USA did just fine. Its athletes struggled in some sports while excelling in others. Americans won fewer medals than they did four years ago in Vancouver, but more than they have at any Winter Games not held on North American soil.

There is always a way to make the numbers look fine, and really, anyone outraged over the medal count needs to get a hobby.

The broader spirit of the Olympics, and the way they can impact the world, always matters far more that the number of medals doled out. Team USA went to the dogs in Sochi.

And it was a wonderful thing.