Posted by Calle on Sunday, 23 February 2014 in Climate Change 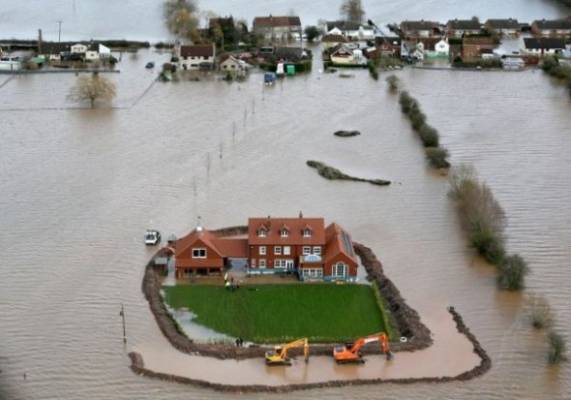 As most of you know already, England’s dramatic sequence of winter storms since December has resulted in its worst winter on record.  England’s records go back 248 years.  (Al Jazeera is reporting 300 years).  Who knows if such a series of storms has ever occurred since the climate stabilized after the last glaciation ended some 8000 years ago, this is truly uncharted territory.

The featured image above serves as a very apt and stark metaphor for just what adaption to climate change means.  That picture was taken at least ten days ago (I found it here where many other dramatic images can be seen – h/t to P3).  Since that time there has been more equally intense rainfall and hurricane force winds, I wonder if those dikes have failed.  If they haven’t, will they hold the next time?  Not everyone can afford those kinds of extraordinary measures either.  Again, the foreshadowing of national and global adaption measures is sobering.