Posted by GreenDog on Wednesday, 26 February 2014 in Fossil Fuels

Colorado First State to Clamp Down on Fracking Methane Pollution 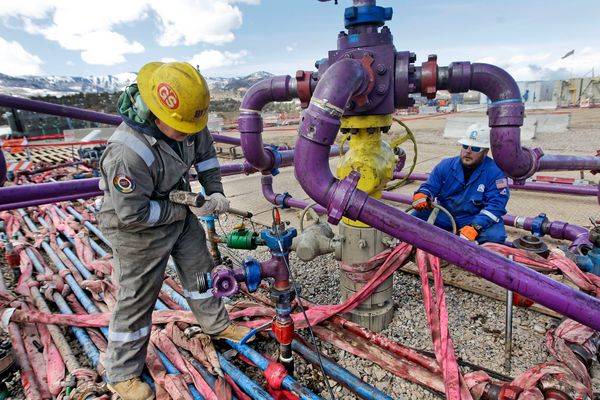 Colorado regulators approved groundbreaking controls on emissions from oil and natural gas operations after an unusual coalition of energy companies and environmentalists agreed on measures to counter worsening smog.

Emissions from oil and gas operations contribute to thickening smog that exceeds federal ozone guidelines along Denver’s picturesque backdrop of the Rocky Mountains. Such pollution includes methane, a source of climate-changing greenhouse gas. The haze prompted Governor John Hickenlooper to ask energy companies and environmentalists to come together to write the first-of-their-kind rules.

“This is a model for the country,” said Dan Grossman, the defense fund’s Rocky Mountain regional director. “We’ve got this simmering battle between the oil and gas industry and neighborhoods throughout the state that are being faced with development. That degree of acrimony is pushing the industry and policy makers to look for ways to get some wins.”

Drilling in Colorado, North Dakota, Montana, Pennsylvania and Ohio that is fueling the nation’s energy boom is also moving closer to communities, forcing state regulators to address complaints of noise and traffic and concerns about potential contamination risks to air and water. Citing these worries, five Colorado communities voted to restrict a drilling technique known as hydraulic fracturing, or fracking.

Under Pressure
Fracking uses a mixture of water, chemicals and sand, injected below ground under pressure, to break rock formations so oil and gas can flow to the surface. It requires companies to use a series of pipes and tanks around the well to move and store hydrocarbons.

To appease residents, state lawmakers are looking for measures that allow them to monitor and control drilling activities while still reaping millions in taxes from increased energy production. Over the course of a year, the new regulations will remove enough volatile organic compounds from the air to equal those emitted by every car and truck in the state, backers said.

The Air Quality Control Commission approved the rules 8 to 1 yesterday after five days of hearings, rejecting revisions that would have exempted smaller wells and applied the regulations only to operators in areas that routinely violate federal air quality standards.

“It’s not so often a fairly obscure agency gets so much attention -- it’s a tribute to the concerns that people have about these issues,” said John Loewy, the commission chair, following the vote. “We’ve had hundreds and hundreds of comments over these last months.”

“This is the right thing to do for our business,” he said. “We want to find the leaks and fix them because that will reduce our emissions and the rules provide guidance and technology for us to do that.”

“These rules punish rural Colorado for smog created by Boulder and Denver,” said state Senator Greg Brophy, a Republican from Wray seeking his party’s nomination to run against Hickenlooper for governor in November.

Increased drilling in Colorado is likely to be an issue in the gubernatorial campaign this year. Fracking opponents say Hickenlooper, a former oil company geologist, is too cozy with the industry. His Republican challengers say regulations such as those requiring companies to test groundwater and disclose chemicals used in fracking -- which the governor hails as among the toughest in the nation -- restrict production.

Emissions during oil and gas operations represent the state’s largest source of volatile organic compounds that contribute to the formation of ozone, a ground-level pollutant linked to respiratory problems and decreased crop yields. Parts of Colorado violate national air quality standards for ozone.

Methane Effect
The mandates are also the first attempt by a state to regulate methane emissions from fracking. The main component of natural gas, methane is 20 times more potent at trapping heat in the atmosphere than carbon dioxide, according to the U.S. Environmental Protection Agency.

Infrared cameras show that methane and other gases escape during operations that pushed Colorado’s 2012 oil production to the highest in 55 years. The state is the U.S.’s sixth-largest producer of natural gas and ninth-biggest oil producer.

“This is a national issue that a lot of states that have significant oil and gas emissions are struggling with,” said Garry Kaufman, deputy director of the Colorado Department of Public Health and Environment’s Air Pollution Control Division, in testimony during the hearings.

‘Important Problem’
“When I talk with my counterparts about air pollution issues, the first thing that comes up is tanks,” he told the air quality board. “We’re proposing a first-in-the-nation set of rules that would address this very important problem.”

The regulations require companies to install equipment to minimize leakage of toxic gases and to control or capture 95 percent of emissions.

Energy producers would be required to routinely inspect well sites for leaks, as often as once a month, depending on how much oil or gas a well produces. When leaks are discovered, they must be fixed within 15 days.

Oil and gas trade associations opposed parts of the emissions mandates, saying the rules weren’t factually supported and were negotiated by a select group of companies.

In comments filed with state regulators, Chevron Corp. (CVX) said there is the “possibility of political taint in this rulemaking.”

‘Industry Concern’
There is “industry concern that the proposed rules may be a foregone political conclusion,” wrote lawyers representing the company, which operates 800 wells in the state that produce $120 million in royalties and property and severance taxes, “the 10 month stakeholder process appears to have been subverted at the final hour.”

Chevron and members of the Colorado Oil and Gas Association and the Colorado Petroleum Association calculated that costs to comply with the rules would be almost double what state regulators projected. The Air Pollution Control Division estimated costs at $40 million, while industry economists said they would be $100 million.

“These rules cost more than all prior oil and gas measures combined,” testified John Jacus, an attorney with Davis, Graham & Stubbs LLP who represents trade groups and other energy companies, during the hearings. “The rules have not been property evaluated by the division for their cost, both indirect and direct, and their cost to implement.”

Training Personnel
Companies supporting the rules said while they need time to invest in expensive equipment and to hire and train personnel on new systems, they are willing to shoulder the costs.

“We estimate it’s going to cost Noble Energy $3 million dollars a year to comply with this rule,” testified Brian Lockard, the company’s director of environmental, health, safety and regulatory, at the hearing.

“That’s a heavy lift,” he added, saying cost estimates are based on a voluntary monitoring program the company’s been using. “We project we’re going to have to hire 16 additional people.”

Noble runs about 8,000 wells in the Denver-Julesburg Basin, where it plans to invest $12 billion over the next five years. Noble and Anadarko undertake 80 percent of all operations in the basin. Anadarko operates about 5,000 wells there and expects to invest $2 billion in the region this year.

Anadarko said the emissions mandates are necessary to ensure the companies’ investments pay off.

“We all live here, we all have families here and work here and we want to have clean air,” Korby Bracken, Anadarko’s Rockies’ environmental health and safety director, said in a telephone interview. “This provides us an additional piece to talk with community members about what oil and gas companies are doing to make sure we’re protecting the environment.”