Is the Wolf a Real American Hero? 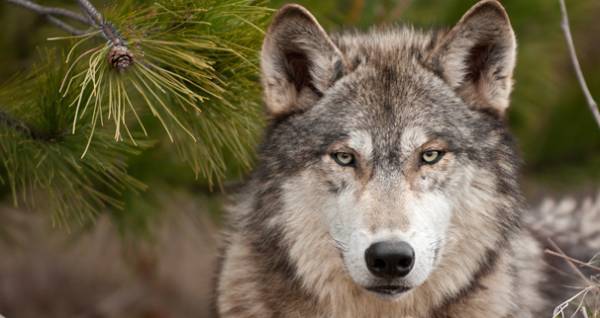 FOR a field biologist stuck in the city, the wildlife dioramas at the American Museum of Natural History are among New York’s best offerings. One recent Saturday, I paused by the display for elk, an animal I study. Like all the dioramas, this one is a great tribute. I have observed elk behavior until my face froze and stared at the data results until my eyes stung, but this scene brought back to me the graceful beauty of a tawny elk cow, grazing the autumn grasses.

As I lingered, I noticed a mother reading an interpretive panel to her daughter. It recounted how the reintroduction of wolves in the mid-1990s returned the Yellowstone ecosystem to health by limiting the grazing of elk, which are sometimes known as “wapiti” by Native Americans. “With wolves hunting and scaring wapiti from aspen groves, trees were able to grow tall enough to escape wapiti damage. And tree seedlings actually had a chance.” The songbirds came back, and so did the beavers. “Got it?” the mother asked. The enchanted little girl nodded, and they wandered on.

This story — that wolves fixed a broken Yellowstone by killing and frightening elk — is one of ecology’s most famous. It’s the classic example of what’s called a “trophic cascade,” and has appeared in textbooks, onNational Geographic centerfolds and in this newspaper. Americans may know this story better than any other from ecology, and its grip on our imagination is one of the field’s proudest contributions to wildlife conservation. But there is a problem with the story: It’s not true.

We now know that elk are tougher, and Yellowstone more complex, than we gave them credit for. By retelling the same old story about Yellowstone wolves, we distract attention from bigger problems, mislead ourselves about the true challenges of managing ecosystems, and add to the mythology surrounding wolves at the expense of scientific understanding.

The idea that wolves were saving Yellowstone’s plants seemed, at first, to make good sense. Many small-scale studies in the 1990s had shown that predators (like spiders) could benefit grasses and other plants by killing and scaring their prey (like grasshoppers). When, soon after the reintroduction of wolves to Yellowstone, there were some hints of aspen and willow regrowth, ecologists were quick to see the developments through the lens of those earlier studies. Then the media caught on, and the story blew up.

However, like all big ideas in science, this one stimulated follow-up studies, and their results have been coming in. One study published in 2010 in the journal Ecology found that aspen trees hadn’t regrown despite a 60 percent decline in elk numbers. Even in areas where wolves killed the most elk, the elk weren’t scared enough to stop eating aspens. Other studies have agreed. In my own research at the University of Wyoming, my colleagues and I closely tracked wolves and elk east of Yellowstone from 2007 to 2010, and found that elk rarely changed their feeding behavior in response to wolves.

Why aren’t elk so afraid of the big, bad wolf? Compared with other well-studied prey animals — like those grasshoppers — adult elk can be hard for their predators to find and kill. This could be for a few reasons. On the immense Yellowstone landscape, wolf-elk encounters occur less frequently than we thought. Herd living helps elk detect and respond to incoming wolves. And elk are not only much bigger than wolves, but they also kick like hell.

The strongest explanation for why the wolves have made less of a difference than we expected comes from a long-term, experimental study by a research group at Colorado State University. This study, which focused on willows, showed that the decades without wolves changed Yellowstone too much to undo. After humans exterminated wolves nearly a century ago, elk grew so abundant that they all but eliminated willow shrubs. Without willows to eat, beavers declined. Without beaver dams, fast-flowing streams cut deeper into the terrain. The water table dropped below the reach of willow roots. Now it’s too late for even high levels of wolf predation to restore the willows.

A few small patches of Yellowstone’s trees do appear to have benefited from elk declines, but wolves are not the only cause of those declines. Human hunting, growing bear numbers and severe drought have also reduced elk populations. It even appears that the loss of cutthroat trout as a food source has driven grizzly bears to kill more elk calves. Amid this clutter of ecology, there is not a clear link from wolves to plants, songbirds and beavers.

Still, the story persists. Which brings up the question: Does it actually matter if it’s not true? After all, it has bolstered the case for conserving large carnivores in Yellowstone and elsewhere, which is important not just for ecological reasons, but for ethical ones, too. It has stimulated a flagging American interest in wildlife and ecosystem conservation. Next to these benefits, the story can seem only a fib. Besides, large carnivores clearly do cause trophic cascades in other places.

But by insisting that wolves fixed a broken Yellowstone, we distract attention from the area’s many other important conservation challenges. The warmest temperatures in 6,000 years are changing forests and grasslands. Fungus and beetle infestations are causing the decline of whitebark pine. Natural gas drilling is affecting the winter ranges of migratory wildlife. To protect cattle from disease, our government agencies still kill many bison that migrate out of the park in search of food. And invasive lake trout may be wreaking more havoc on the ecosystem than was ever caused by the loss of wolves.

When we tell the wolf story, we get the Yellowstone story wrong.

Perhaps the greatest risk of this story is a loss of credibility for the scientists and environmental groups who tell it. We need the confidence of the public if we are to provide trusted advice on policy issues. This is especially true in the rural West, where we have altered landscapes in ways we cannot expect large carnivores to fix, and where many people still resent the reintroduction of wolves near their ranchlands and communities.

This bitterness has led a vocal minority of Westerners to popularize their own myths about the reintroduced wolves: They are a voracious, nonnative strain. The government lies about their true numbers. They devastate elk herds, spread elk diseases, and harass elk relentlessly — often just for fun.

All this is, of course, nonsense. But the answer is not reciprocal myth making — what the biologist L. David Mech has likened to “sanctifying the wolf.” The energies of scientists and environmental groups would be better spent on pragmatic efforts that help people learn how to live with large carnivores. In the long run, we will conserve ecosystems not only with simple fixes, like reintroducing species, but by seeking ways to mitigate the conflicts that originally caused their loss.

I recognize that it is hard to see the wolf through clear eyes. For me, it has happened only once. It was a frigid, windless February morning, and I was tracking a big gray male wolf just east of Yellowstone. The snow was so soft and deep that it muffled my footsteps. I could hear only the occasional snap of a branch.

Then suddenly, a loud “yip!” I looked up to see five dark shapes in a clearing, less than a hundred feet ahead. Incredibly, the wolves hadn’t noticed me. Four of them milled about, wagging and playing. The big male stood watching, and snarled when they stumbled close. Soon, they wandered on, vanishing one by one into the falling snow.

That may have been the only time I truly saw the wolf, during three long winters of field work. Yet in that moment, it was clear that this animal doesn’t need our stories. It just needs us to see it, someday, for what it really is.