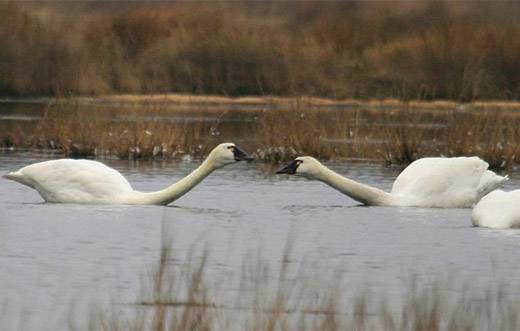 Hundreds of tundra swans suddenly rose off of a marsh, the strokes of their powerful wings making a whistling sound as they flew.

They landed a short distance away at another marsh, where other tundra swans were gliding over the water like a flotilla of toy sailboats.

Mike Schlepp doesn't know what triggers the swans' abrupt change of location, but he observes the flights of the showy birds daily. About 3,000 migrating swans are using the wetlands on his farm south of Rose Lake, Idaho.

Schlepp and U.S. Fish and Wildlife officials couldn't be happier. This is the first year they've counted large numbers of tundra swans on the farm, where nearly 400 acres of clean-feeding areas were established in 2007 through a conservation easement.

Migrating swans stop to feed at marshes along the Coeur d'Alene River en route to breeding grounds in Alaska. But most of the river's wetlands are contaminated with mine waste, putting the swans at risk of death from lead poisoning. About 150 swan carcasses are found each year in the marshes.

Before this year, the highest number of tundra swans using the safe feeding grounds at the Schlepp farm was 221. But on Saturday, swans started arriving en masse, lured in by 32 decoys that Schlepp set out.

"The sky was filled with swans, one wave after another," he said. "It was a tremendous sight."

So far, wildlife officials have counted about 3,200 tundra swans in the Coeur d'Alene Basin, said Toni Davidson, a U.S. Fish and Wildlife biologist who manages the Schlepp project. That means that nearly all of them are on clean feeding grounds, she said.