Posted by plantitfilm on Tuesday, 25 March 2014 in Peace 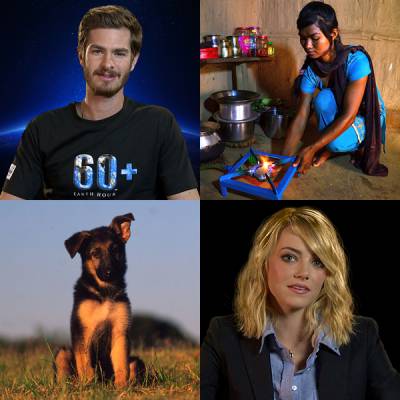 Following the recent announcement that Spider-Man is the first Super Hero ambassador for Earth Hour, the global movement organised by WWF, Andrew Garfield and Emma Stone from the highly anticipated motion picture ‘The Amazing Spider-Man 2’ have chosen to back two separate projects on ‘Earth Hour Blue’, a new crowdfunding and crowdsourcing platform for the planet.

With a message to inspire individuals to use their power to become a Super Hero for the planet, the new platform launched from Earth Hour’s global headquarters in Singapore will allow anyone to use their voice or their dollar to take action and support projects across the globe.

Now run globally from Singapore at the heart of Asia, Earth Hour has rapidly grown to involve hundreds of millions of people from all walks of life and global landmarks across 7000 cities and towns and 154 countries and territories.

Andrew Garfield, who plays Peter Parker/Spider-Man in the upcoming movie, is supporting the Earth Hour Blue project ‘A Flame Called Hope’. The project aims to provide clean bio-gas energy for local communities in Nepal, thereby reducing deforestation and providing an alternate means of livelihood for families in the area.

This bio-gas initiative will ultimately help transform the lives of children in communities of Nepal’s Terai Arc Landscape, by allowing them to go to school instead of accompanying their parents to collect firewood.

Children in a village in Nepal sent Andrew Garfield a personal heartfelt video message to support the project, and their message “I love you Spider-Man” shows that the impact of Super Heroes can reach far beyond fiction.

Garfield says: “Earth Hour is launching the world’s first crowdfunding and crowdsourcing platform for the planet, so you too can become a superhero just like Spider-Man.”

Emma Stone, who plays Gwen Stacy in the film, has chosen to support the Earth Hour Blue ‘Puppy Protectors’ project, which aims to train sniffer dog puppies and their handlers to track animals, find wildlife crime scenes, detect illegal trade items, and chase down poachers with the rangers on the frontlines of Chitwan National Park, Nepal.

WWF is working with governments across the globe to combat wildlife crime by protecting animals in their natural habitats, and is using sniffer dogs as a solution to finding poachers and illegal wildlife products around the world.

“Earth Hour gives you the power to inspire anyone, even if you’re just one person. And Earth Hour is much more than an hour. There are great projects from the crowd, for the planet, happening all over the world,” says Emma Stone.

In tandem with the crowd’s enthusiasm at events across the world has been Earth Hour’s massive digital presence, which since its inception in 2007 has grown to reach hundreds of millions of people via social platforms from across the world. Earth Hour envisions the new crowdfunding and crowdsourcing platform will generate environmental outcomes by harnessing these participants to help choose and raise funds for their favorite on-the-ground projects available on the new digital platform.

“Earth Hour is about using your power to make a difference. Anyone can make an impact whether by using their voice or by giving a few dollars, and now you can do it from the palm of your hand,” said Andy Ridley, CEO and Co-Founder of Earth Hour.

The Amazing Spider-Man 2 director Marc Webb has already backed the ‘Power up a Ranger” project in Indonesia which aims to provide better equipment for WWF Rangers protecting Indonesia’s endangered wildlife such as the Sumatran Tiger, Elephant, Rhino and Orangutan and their forest habitat.

The projects on Earth Hour Blue are all vetted by WWF, one of the world’s largest and most respected conservation organisations. These WWF vetted projects are creating solutions to the environmental challenges facing our planet.

Following the same open sourced approach of Earth Hour’s on-the-ground activities, anyone can be among the first innovators to engage with the projects and multiply their power for the planet. In addition, people can add their voice and input to certain projects, engaging far beyond financial support. Using these two sides of crowd-centric support, Earth Hour is hoping that the new platform will grow its efforts to cement its place as a year around movement. In Singapore, the focus will be on crowdsourcing pledges for local sustainability actions including raising air conditioner temperatures by one degree, water conservation, energy efficiency and reduction in use of plastic.

Sony Pictures Entertainment, the studio behind The Amazing Spider-Man 2, is contributing to a WWF-China and Earth Hour Blue project that provides efficient cookstoves to prevent deforestation in the habitat of the Giant Panda. Through its efforts, the studio will receive Gold Standard carbon offsets that render the entire physical production of The Amazing Spider-Man 2 as well as its publicity tour, carbon-neutral.

Expanding on many sustainability efforts over the years, The Amazing Spider-Man 2 became the most eco-friendly tentpole production in the history of Columbia Pictures. These environmental efforts, on set and off, were supported at every level – from producers, studio executives, and cast and crew and began as soon as the film went into pre-production.

“I’m very proud of the fact that The Amazing Spider-Man 2 is entirely carbon-neutral. We made a commitment to be as eco-conscious as possible during production itself, when we took a special effort to think green and avoid waste; now, completing that process with Earth Hour Blue is a wonderful testament to what we can achieve when we all work together,” says Jeff Blake, Chairman, Worldwide Marketing and Distribution, Sony Pictures Entertainment.

Much of the success of Earth Hour has so far been fueled by the global mobilization of people across the world taking part in the annual ‘lights out event’, which will be held this year on March 29, 2014 at 8.30pm.

So use your power and be a Super Hero for the planet at earthhour.org