Posted by Angel on Tuesday, 10 January 2012 in Climate Change 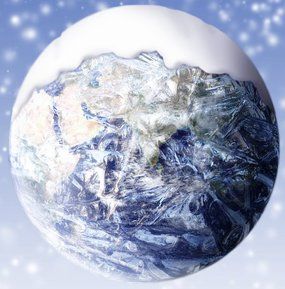 The next ice age could be delayed by tens of thousands of years due to excessive amounts of heat-trapping carbon dioxide in the atmosphere, which disrupts Earth’s natural cycle of warming and cooling, according to a study in Nature Geoscience.

Channell, a distinguished professor of geology at the University of Florida, says one period, around 780,000 years ago, is remarkably like our own.
“It looks very similar because the orbital characteristics of the Earth, which is known from astronomers, is a dead ringer for the orbital states that we have today. And we can use that as an analog to say, 'When will our interglacial state, which we’re in right now, go into the next glacial period?'”

Those orbital features - how the Earth revolves around the sun, the shape of its orbit, the tilt and wobble of the Earth on its axis - undergo long, cyclical changes. Those changes directly affect the amount of radiation we receive from the sun, which in turn affects the Earth’s climate.
Based on these natural cycles, our current warming period should end within 1,500 years. Channell says what’s different from 780,000 years ago is that CO2 levels in the atmosphere back then were 240 parts per million, compared with 390 parts per million today.

“And so we can be fairly sure that we have, whether we like it or not, delayed the possibility that we will revert from our present interglacial into a glacial state.”

Channell says the findings underscore the dramatic effect of CO2 - released by the burning of fossil fuels in our cars, power plants and buildings - on the Earth’s natural climatic systems.
“In other words, the orbital characteristics of the Earth, which [determine] the amount of radiation [reaching the earth] from the sun ... [and] which over millions of years have controlled the climate state on Earth, are no match for these excessive levels of CO2 in our atmosphere,” said Channell.

Cooling that would naturally occur in response to changes in the Earth’s solar orbit simply cannot keep up.

While a delayed ice age may sound like good news, Channell says, it isn’t.

The high concentration of heat-trapping greenhouse gases in the atmosphere is beginning to destabilize ice sheets in Greenland and Antarctica.
“Once you slough off the continental ice into the ocean, of course the consequence is sea level rise," said Channell.

"And it’s not being, I think, over-dramatic to say that considering the proportion of the world’s population that lives close to sea level, the implications of this sort of accelerated sea level rise are enormous,” he said. Channel says those ice sheets are expected to continue to melt until the next phase of cooling begins. And when that will be is now in serious doubt.