Posted by tvernile on Wednesday, 02 April 2014 in Climate Change 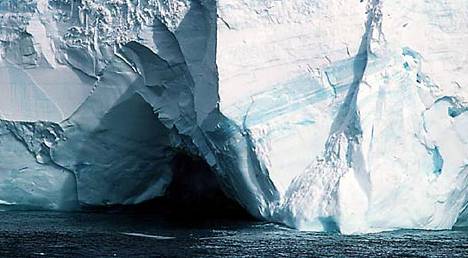 An international team of scientists has discovered that the last remaining stable portion of the Greenland ice sheet is stable no more.

The new result focuses on ice loss due to a major retreat of an outlet glacier connected to a long "river" of ice -- known as an ice stream -- that drains ice from the interior of the ice sheet. The Zachariae ice stream retreated about 20 kilometers (12.4 miles) over the last decade, the researchers concluded. For comparison, one of the fastest moving glaciers, the Jakobshavn ice stream in southwest Greenland, has retreated 35 kilometers (21.7 miles) over the last 150 years.

Ice streams drain ice basins, the same way the Amazon River drains the very large Amazon water basin. Zachariae is the largest ice stream in a drainage basin that covers 16 percent of the Greenland ice sheet -- an area twice as large as the one drained by Jakobshavn.

This paper represents the latest finding from GNET, the GPS network in Greenland that measures ice loss by weighing the ice sheet as it presses down on the bedrock.

Historically, Zachariae drained slowly, since it had to fight its way through a bay choked with floating ice debris. Now that the ice is retreating, the ice barrier in the bay is reduced, allowing the glacier to speed up -- and draw down the ice mass from the entire basin.

"This suggests a possible positive feedback mechanism whereby retreat of the outlet glacier, in part due to warming of the air and in part due to glacier dynamics, leads to increased dynamic loss of ice upstream. This suggests that Greenland's contribution to global sea level rise may be even higher in the future," said Bevis, who is also the Ohio Eminent Scholar in Geodynamics and professor of earth sciences at Ohio State.

Study leader Shfaqat Abbas Khan, a senior researcher at the National Space Institute at the Technical University of Denmark, said that the finding is cause for concern.

"The fact that the mass loss of the Greenland Ice Sheet has generally increased over the last decades is well known," Khan said, "but the increasing contribution from the northeastern part of the ice sheet is new and very surprising."

GNET, short for "Greenland GPS Network," uses Earth's natural elasticity to measure the mass of the ice sheet. As previous Ohio State studies revealed, ice weighs down bedrock, and when the ice melts away, the bedrock rises measurably in response. More than 50 GNET stations along Greenland's coast weigh the ice sheet like a giant bathroom scale.

Khan and his colleagues combined GNET data with ice thickness measurements taken by four different satellites: the Airborne Topographic Mapper (ATM), the Ice, Cloud and Land Elevation Satellite (ICESat), and the Land, Vegetation and Ice Sensor (LVIS) from NASA; and the Environmental Satellite (ENVISAT) from the European Space Agency.

They found that the northeast Greenland ice sheet lost about 10 billion tons of ice per year from April 2003 to April 2012.

According to previous measurements and aerial photographs, the northeast Greenland ice sheet margin appeared to be stable for 25 years -- until 2003. Around that time, a string of especially warm summers triggered increased melting and calving events, which have continued to the present day.

A large calving event at the Zachariae glacier made the news in May 2013, and Khan and his team witnessed and filmed a similar event in July.

Increased ice flow in this region is particularly troubling, Khan said, because the northeast ice stream stretches more than 600 kilometers (about 373 miles) into the center of the ice sheet, where it connects with the heart of Greenland's ice reservoir.

"This implies that changes at the margin can affect the mass balance deep in the center of the ice sheet. Furthermore, due to the huge size of the northeast Greenland ice stream, it has the potential of significantly changing the total mass balance of the ice sheet in the near future," he added.

Bevis agreed: "The fact that this ice loss is associated with a major ice stream that channels ice from deep in the interior of the ice sheet does add some additional concern about what might happen."