Posted by jonehopp on Wednesday, 09 April 2014 in Climate Change 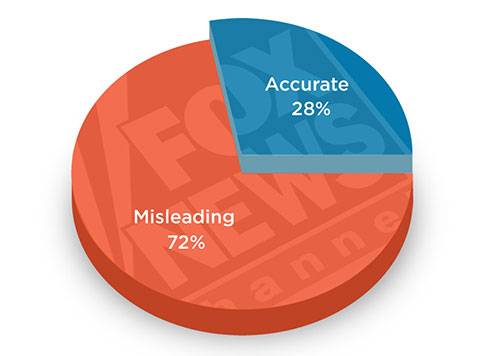 The Union of Concerned Scientists (UCS) has put together an awful pie chart for Fox News:

Those proportions come from a look at Fox News coverage of climate change in 2013, when UCS found 50 segments to examine for accuracy. Of those, 72 percent “included misleading portrayals of the science.” The breakdown goes further than the network-wide coverage, delivering a sharp elbow to one of the Erik Wemple Blog’s favorite shows on cable news:

"More than half of Fox’s misleading coverage (53%) was from one program, The Five, where the hosts often instigated misleading debates about established climate science. In general, Fox hosts and guests were more likely than those of other networks to disparage the study of climate science and criticize scientists."

Even more pointedly, it cited “The Five” co-host Greg Gutfeld for alleging that there’d been a “pause in global warming over 15 years now.” Indeed there’s been a slowdown in the rate of warming dating back to 1998, but the UCS report faults Gutfeld and others on Fox News’s air for having “omitted references to long-term trends in rising temperatures and [failing to] discuss other markers of climate change, such as rising seas or melting glaciers (NASA 2013; Nuccitelli 2013).”

Greg Gutfeld, however, is not one to be scared off by some study, as he showed in his fun 2012 book, “The Joy of Hate: How to Triumph over Whiners in the Age of Phony Outrage.” In that book, Gutfeld rips a study in the International Journal of Press/Politics that looked at the cable nets’ coverage of climate change, quoting a story in U.S. News & World Report:

“Although Fox discussed climate change most often, the tone of its coverage was disproportionately dismissive,” says the study by four professors, two from George Mason University, the others from Yale and American University. They wrote, “Fox broadcasts were more likely to include statements that challenged the scientific agreement on climate change, undermined the reality of climate change, and questioned its human causes.”

Writes Gutfeld about that assessment of Fox News’s coverage: “Yikes! Fox challenged, undermined and questioned! To the gallows! That quote, right there, shows you that tolerance is not deemed necessary if you reformat the game board so anyone who questions the basic assumptions is disqualified from playing.”

Expect the results of the UCS thing to get some rotation today on “The Five,” particularly since it more or less applauds the other networks (CNN, 70 percent accurate; MSNBC, 92 percent accurate) in their coverage of the topic area. As the panelists on “The Five” banter about the fine points, they’ll likely kick up grist for the next climate-change study, which’ll supply yet another round of material for bloggers and on-air discussion. Such is the cable-news cycle of life. 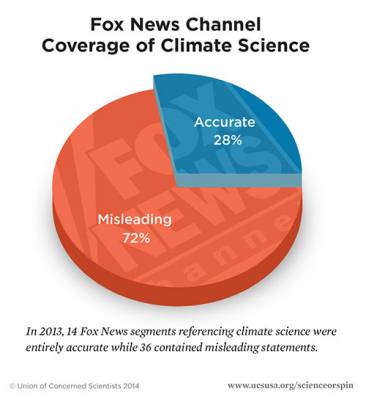