Posted by tvernile on Tuesday, 08 April 2014 in Green Design 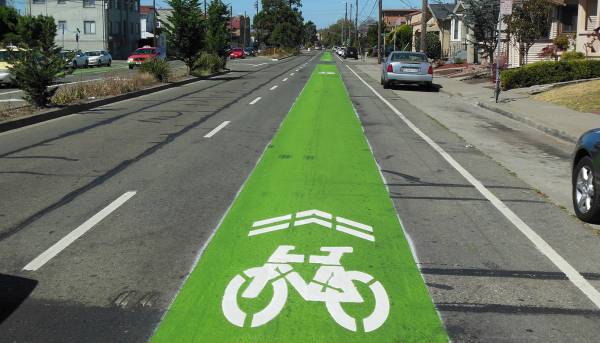 Pittsburgh is 1 of 6 cities selected for national Green Lanes Project 2.0 by PeopleForBikes

PeopleForBikes has selected Pittsburgh to be one of six US cities to be included in the Green Lane Project 2.0, Mayor Bill Peduto announced today in a press release.

This is monumental news for biking in Pittsburgh. But don’t let the project’s name fool you. This isn’t just about putting green paint on the ground, although that may be in the toolbox. Our involvement means that in addition to the $25,000 that the City will receive for bike lane improvement (i.e. paint, signage, bollards, curbs, planters and landscaping), the City will receive $250,000 in in-kind engineering, training and outreach support.  The later is the crux of why this news is so important for our cause.

The in-kind technical support will give Pittsburgh’s planners, traffic engineers, and elected officials the necessary support to get these projects in the ground, and learn about the latest in bike lane design. Some will even be flown to Copenhagen to study the world’s best-practices in designing safe, accessible streets!

City staff will learn exactly how “green” our streets can be: “green” as in designed so bikes can be used as a viable, sustainable transportation option, “green” as in spurs for economic investment and community development, “green” as in utilizing best-practices to make bike lanes safe, comfortable and visible. The Green Lane Project 2.0 is a shot in the arm for Pittsburgh’s bike-friendliness.

This is especially exciting in the wake of Mayor Peduto’s first weeks in office, and a year’s-worth of his describing a very exciting vision of how our city will look with him at the helm.  For instance, the Green Lane Project aligns nicely with some of his responses to BikePGH’s 2013 I Bike. I Walk. I Vote. mayoral candidate questionnaire, stating that he “will make enhanced bike infrastructure a priority.” Also reaffirming that, he “will incorporate complete streets design and planning into every construction project the city embarks upon to ensure that whenever we are out doing work to repave a street or repair a sidewalk we are taking the opportunity to upgrade the streetscape to incorporate best practices in complete streets design such as physically separated bike lanes and highly-visible crosswalks. If we pair upgrades with already-planned projects we will save time and money in process.”

Just last week, in a speech at the National Bike Summit in Washington D.C., he summed it up nicely and will be “doubling down”on investing in on-street bicycle infrastructure. ”Because we have this crazy little downtown area that was basically designed as a two-grid system that doesn’t mesh at all, we have this opportunity to take a large swath of land in a densely urban area and create a complete streets model that could become a model for anywhere — again, because of the challenges that we have, both in the infrastructure and in the basic history of our town. We can help to show that if you can do it in Pittsburgh, you can basically do it anywhere.”

Pittsburgh’s inclusion in this program shows that we are indeed taking another step closer to building an interconnected network of bike ways that are safe an accessible for all people to choose biking as a transportation option.

However, the job isn’t done, and we won’t be able to do this without our members. In the upcoming months, we’re going to need people to be paying attention, and showing up to public meetings in support of these transformational changes.  Even the Mayor stated that “with Bike Pittsburgh going strong — boasting a bigger membership than the city’s Democratic Committee — they’re making great strides. “That type of organization is needed in every city,” Peduto said. “They make it easy for elected officials to join on.”

Pittsburgh as one of six new U.S. cities to join an intensive two-year program to build better bike lanes.

Atlanta, GA, Boston, MA, Denver, CO, Indianapolis, IN, Pittsburgh, and Seattle, WA will receive financial, strategic and technical assistance to create low-stress streets and increase vitality in urban centers through the installation of protected bike lanes. The six cities were chosen from more than 100 U.S. cities that submitted letters of interest for the program.

Launched in 2012, the Green Lane Project works with U.S. cities to speed the installation of protected bike lanes around the country. These on-street lanes are separated from traffic by curbs, planters, parked cars or posts to make riding a bike an appealing option for more people.

“It was extremely difficult to narrow down our selection to just six cities; we are seeing an upsurge of interest in accommodating bikes on busy city streets,” said Martha Roskowski, PeopleForBikes Vice President of Local Innovation. “Pittsburgh has ambitious goals and a strong vision supported by the elected officials and the community. They are poised to get projects on the ground quickly and will serve as an excellent example for other interested cities.”

Last year Pittsburgh installed its first green painted bike lane in the Bloomfield neighborhood, with help from a PeopleForBikes grant. The lane is one of the city’s most popular and successful on-street infrastructure projects to date and significantly improves the visibility of people on bikes and adds clarity to a complicated and high volume intersection. The project added to Pittsburgh’s 70 miles of on-street bicycle infrastructure, 20 miles of riverfront trails, and 7,000 bicycle parking spaces.

“We’ve moved to educate Pittsburgh citizens on our existing bike infrastructure components and this decision by the Green Lane Project will help my administration double-down on those investments in the future,” said Pittsburgh Mayor William Peduto.

In the first two years of the program (2012 and 2013), the Green Lane Project worked closely with other major U.S. cities – Austin, TX, Chicago, IL, Memphis, TN, Portland, OR, San Francisco, CA and Washington, DC – to build protected bike lanes. Since then, the number of protected bike lanes on city streets nationwide has nearly doubled from 80 to 142 – with more than half of all growth coming from the Project’s six focus cities. The founding cities will continue as mentors to the new class while continuing to build their bicycling networks with the momentum driven by the Project.

Protected bike lanes bring predictability to busy streets: drivers like knowing where to expect riders, and pedestrians report fewer bikes on the sidewalk. The lanes make roads safer for all users, reducing bike, auto and pedestrian injuries by up to 50%.

Protected lanes also add vitality and energy to the street, attracting new businesses and helping create a community people want to be in, not just move through. In New York City, local businesses on the 9th Avenue corridor saw a 49% increase in retail sales after the construction of protected bike lanes, compared to only a 3 percent increase citywide.

Pittsburgh leaders will join the Green Lane Project at an official kickoff event in Indianapolis in late April.

About the Green Lane Project

The Green Lane Project is a program of the nonprofit PeopleForBikes, a movement to unite millions of people to improve bicycling in America. The Project helps cities build better bike lanes to create low-stress streets. It is focused on protected bike lanes, which are on-street lanes separated from traffic by curbs, planters, parked cars or posts.