Posted by tvernile on Tuesday, 15 April 2014 in Biofuels 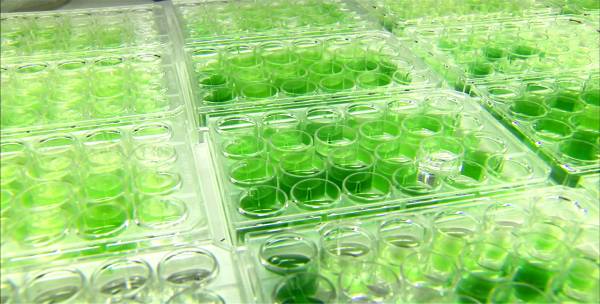 Lab success doesn’t always translate to real-world success. A team of Michigan State University scientists, however, has invented a new technology that increases the odds of helping algae-based biofuels cross that gap and come closer to reality.

The current issue of Algal Research showcases the team’s invention — the environmental photobioreactor. The ePBR system is the world’s first standard algae growing platform, one that simulates dynamic natural environments.

Simply put, ePBR is a pond in a jar that helps identify, cultivate and test algal strains that have the potential to make the leap from lab to pond, proliferate in real-world, real-pond settings and produce the most oil.

Many scientists around the globe are looking for strains of algae that could become a sustainable source of alternative energy. A vexing problem they face, however, is that algal strains that perform well in labs often get stomped when it’s time to scale-up the experiment, said Ben Lucker, MSU research associate.

“It’s like training elementary kids to be really good pingpong players,” he said. “But then they take the kids and throw them into a football game against professional players; in those settings, they simply can’t compete at all.”

The ePBRs, which subsequently help make algae biofuel research more desirable to investors, were the brainchild of David Kramer, Hannah Distinguished Professor of Biochemistry and Molecular Biology at MSU.

Kramer’s lab is like no other. Even though it’s housed among other plant biologists, it could be mistaken for an electronics factory. The benches are covered with wires, soldering irons and printed circuit boards. There are even few early prototypes that provide a history of ePBR’s progress.

The latest models glow green and whir quietly as they test various strains. By allowing scientists to duplicate natural settings in a lab, ePBRs eliminate many variables before scaling up. The bioreactors are about the size of coffee makers and can induce changes in light, temperature, carbon dioxide, oxygen, evaporation, nutrient availability and more.

The ePBR system also can duplicate and confirm results from experiments conducted anywhere in the world. It replaces home-built growing platforms made from flasks, tubing, aluminum foil and grow lights and gives researchers a tool that can consistently replicate conditions and reproduce results, Lucker said.

The potential of ePBRs has already inspired the launch of a company, Phenometrics, an MSU spinoff headquartered in Lansing. The company is merely two years old, but steady orders for the bioreactors have the company already running in the black.

Additional MSU scientists who were part of this study include Christopher Hall and Robert Zegarac.

Kramer’s work is funded in part by the U.S. Department of Energy and MSU AgBioResearch.