Posted by Dale on Friday, 18 April 2014 in Climate Change

Climate Change Debate Is Over 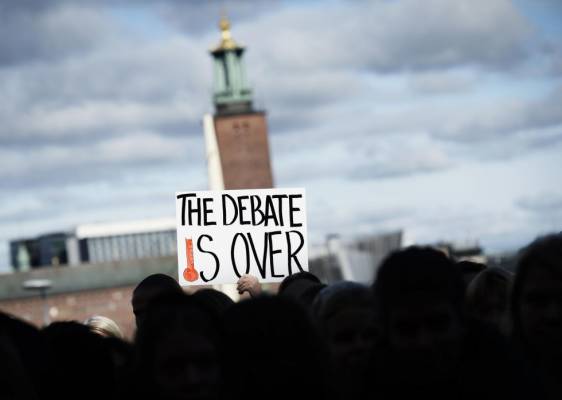 The UN climate panel's prescription for tackling climate change is admirably clear. The problem is that the world is heading in precisely the opposite direction.

BERLIN, 18 April - Keeping the rise in global average temperatures to no more than 2°C above pre-industrial levels will not be prohibitively expensive, the Intergovernmental Panel on Climate Change (IPCC) says, though it won't be easy.

There's just one problem: the atmospheric facts show that the world is not simply ignoring the IPCC. It's moving smartly away from the clean energy future that the Panel says is attainable towards an inexorably hotter and more risky future.

Reaching the target will mean cutting greenhouse gas emissions by 40-70% over 2010 levels by mid-century, the IPCC report says. Yet what is happening at the moment is the exact opposite: average global emissions rose by a billion tonnes a year between 2000 and 2010, faster than ever before.

To avoid the worst impacts of climate change as cheaply as possible, the report urges an energy revolution to end the dominance of fossil fuels. The IPCC says  investments in renewable energy need to triple, with subsidies to fossil fuels declining and a switch to natural gas to help countries to get rid of coal.

The path to lower emissions may cost the energy giants dear, the IPCC acknowledges. "Mitigation policy could devalue fossil fuel assets and reduce revenues for fossil fuel exporters," Professor Ottmar Edenhofer, co-chair of the IPCC's Working Group III, which produced the report, told a public meeting here. "To avoid dangerous interference with the climate system, we need to move away from business as usual."

Another controversial point is the report's inclusion of nuclear power as a low-carbon option (it acknowledges that it has declined globally since 1993 and faces safety, financial and waste-management concerns). The report also advocates carbon capture and storage (CCS), noting that it remains untested on a large scale.

But the IPCC insists that diverting hundreds of billions of dollars from fossil fuels into renewable energy and cutting energy waste would shave just 0.06% off expected annual economic growth rates of 1.3%-3%. "Statistically you won't notice," said Dr Ryer Gerlagh, a co-ordinating lead author on the economics chapter of the report.

Li Shuo of Greenpeace China said: "Science has spoken: climate action is no burden, it’s an opportunity. As renewable energies are growing bigger, better and cheaper every day, the age of dangerous and polluting coal, oil and gas is over. The only rational response to this report is to start the phase-out of fossil fuels immediately."

Global temperatures have risen about 0.8°C since record-keeping started in 1850. Current pledges by governments to reduce emissions by 2020 have set the world on a path to between 3 and 5°C of warming by 2100, the IPCC says.

The Working Group III contribution to the IPCC's Fifth Assessment Report (AR5) is intended to provide a comprehensive assessment of the options for mitigating climate change through limiting or preventing greenhouse gas emissions. It may have shown that those options exist and are affordable. But that is very far from showing that governments can be persuaded to use them. - Climate News Network

Henner Weithöner is a freelance journalist in Berlin specialising in renewable energy and climate change.