Posted by GDG on Tuesday, 29 April 2014 in Sustainable Development 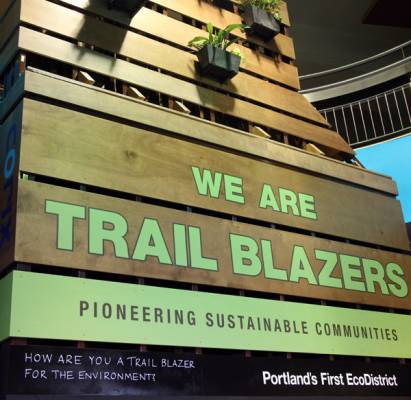 While the month of April is generally recognized as “Earth Month,” over the last six years, the NBA has brought attention to environmental issues by hosting NBA Green Week Presented By Sprint.  This year’s event featured the creation of commemorative t-shirts made out of post-consumer bottles by recording artist Pharrell, players hitting the court in adidas uniforms made out of 60-percent recycled materials and the NBA and Sprint pledging to purchase the largest number of renewable energy certificates in league history–17,085.  That number of certificates equates to the amount of renewable energy used for the NBA Global Games 2014, Christmas Day games, NBA All-Star 2014, 2014 NBA Playoffs, The Finals 2014 and the 49 games that took place during NBA Green Week.  The energy consumed during those events, and the renewable energy certificates that the NBA and Sprint pledged to purchase, equates to 17,085,000 kilowatt hours of renewable energy generated, which is the same amount of energy needed to power 1,577 average U.S. homes for a year.

While the NBA has heightened its focus to reduce its carbon footprint in the last five years, the league’s teams have served as leaders in the green movement.  Since 2007, the Portland Trail Blazers have been hosting a “Green Awareness Game,” to bring attention to the role that NBA teams and fans alike hold in sustaining the environment.  However, what is unique about the Trail Blazers, is that environmental awareness and sustainability remain key focuses of the team’s conversation with fans throughout the season.  For the Trail Blazers, leading this conversation was part of embracing the fans in the community the team calls home.  ”Living in Portland, with environmental stewardship booked into the DNA and fabric of the community, we decided as an organization to understand more of our footprint.  We did a sustainability assessment of who we were as an organization.  We hired a local, nationally recognized consultant to complete an assessment and we decided to expand it to look at our carbon footprint.  Looking at all of our programs and procedures, we did a Scope 3 analysis [an analysis that evaluates a company's greenhouse gas emissions inventory, including indirect emissions].  We got that report and it showed that we were on the edge of being leaders, that there were some improvements we could make and policies we could implement to put us in a leadership role,” said the Portland Trail Blazers’ senior director of sustainability and public affairs, Justin Zeulner.

From that report, the Trail Blazers recognized that one step they could take to become a sustainability leader was to have their home arena, the Moda Center, LEED certified.  LEED stands for Leadership in Energy & Environmental Design.  Certification is issued through the U.S. Green Building Council and comes in various levels, ranging from certified to platinum.  After a discussion with team executives that considered the Trail Blazers 25,000-ton carbon footprint, the team determined that one way to achieve its goal of eradicating that footprint was to achieve LEED certification.  In 2008, the Trail Blazers began the process which led them to seek LEED certification and received gold certification in 2010.  However, from the team’s perspective, LEED certification was the starting block for where it planned to travel in reducing its carbon footprint.  ”LEED certification was not an end-all for us.  That was a middle part and part of the journey that set us up so that we could say, ‘these are our policies and practices,’ and we are going to move forward,” Zeulner explained.

And the Trail Blazers have move forward.  What the team has created since 2008 is not only a corporate platform that is environmentally friendly, but one that has engaged a wide spectrum of fans in the team’s backyard.  From co-founding the Green Sports Alliance to hosting bike-to-game events, the Trail Blazers have found that fans continue to positively respond to their environmental initiatives.  For instance, at the team’s first bike-to-game event, 20 cyclists attended.  Today, Zeulner notes that the there are 200-250 bicycles parked outside of the Moda Center at a given Trail Blazers game.  ”People have become fans because they believe we are doing the right thing.  The engagement has been unbelievable.  We would tend to believe that people will show up for games because of the team and the atmosphere of the arena, and that environmental stewardship plays a part of it.  What we’ve seen, though, is that there is very positive feedback from fans that they get to participate in recycling and composting at games,” Zeulner said.

Along with engaging fans and creating community goodwill, the Trail Blazers’ initiatives have had a positive business impact.  For instance, the team has been able to expand its stable of corporate partners.  By focusing directly on environmental issues, the team has added a list of “sustainability partners,” ranging from Christenson Electric, Inc., who serves as the preferred electrical provider of the Rose Quarter and StalkMarket, which provides compostable products for all food and beverage containers in the Moda Center.  Zeulner says that the Trail Blazers have spent $650,000 on the sustainability projects the team has taken on since 2008.  However, he notes that because of these projects, the team has seen savings of $4.1 million over the same period.  ”We are proud that we have been able to help an industry change to begin thinking of sustainability as part of doing business, and not a project.  However, while we may have achieved a lot, we have a long ways to go.  While we started with a 25,000 metric ton carbon footprint and are down to 10,000 metric tons, we are not at zero.  We are going to continue working to get to zero,” Zeulner remarked.