Posted by byoung on Friday, 09 May 2014 in Climate Change 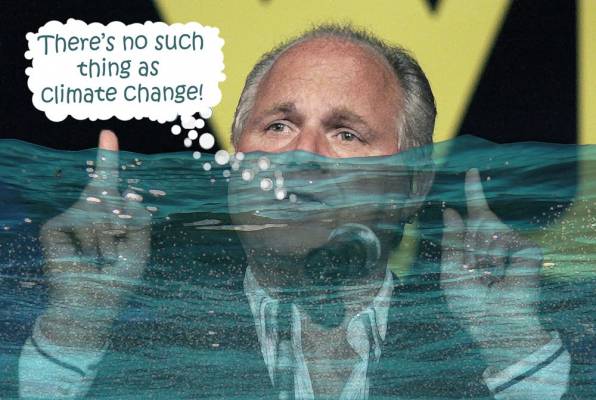 he decibel level in our national debate about global temperature went up several notches this week. The White House noisily released a report full of dire claims about the havoc manmade global warming is causing in America — and Republicans, equally noisily, denounced this as "liberal gloom and doom."

The left has a deep ideological need to hype this issue, and the right to minimize it. And despite the deafening political noise on what ought to be a scientific matter, Americans must not be tempted to reach for their earplugs in disgust. After all, these ideological wars are how democracies sort out their differences.

Republicans are having none of it. They have dusted off their own report, prepared for the Senate Environment and Public Works Committee last summer, which points out that the observed warming — 0.8 degrees C since 1895 — is much milder than previously expected and can't possibly be blamed for these extreme weather events which, they claim, are no worse than before.

Why do Republicans so stubbornly resist the climate change story? It's not like when a tornado touches down, it spares them, targeting only Democrats. Conversely, why are liberals so eager to buy the climate apocalypse? It's not like they can insulate themselves from rising energy prices or job losses that a drastic energy diet would produce.

The answer is that each side is driven by concerns over whether this issue advances or impedes its broader normative commitments, not narrow self-interest.

The right's chief commitment (which I share) is to free enterprise, property rights, and limited government that it sees as core to human progress. So when the market or other activities of individuals harm third parties or the environment, they look for solutions in these principles.

If overgrazing threatens a pasture, to use a classic example, the right's answer is not top-down government diktats to ban or ration use. Rather, it is to divvy up the pasture, giving ownership to farmers — or privatizing the commons. The idea is that what individuals own, they protect; what they don't, they abuse.

But there is no pure free market or property rights solution to global warming. There is no practical way to privatize the Earth's atmosphere or divvy up pollution rights among the world's seven billion inhabitants in 193 countries. This creates a planet-sized opening for the expansion of the regulatory state. Hence, right-wingers have an inherent need to resist the gloomy global warming narrative.

This is a massive conservative blind spot. But it is, in many ways, matched by liberals' tunnel vision.

It is no secret that liberal commitment is less to promoting individual liberty and more to curbing capitalistic greed, which the left views as the great enemy of social justice and equality. At first blush, environmentalism and egalitarianism appear in conflict given that the environment is something of a luxury good that rich folks generally care about more than the poor.

Indeed, this conflict is why the 1960s New Left, driven primarily by humanistic concerns such as eradicating poverty and eliminating racism, shunned the emerging environmental movement for over a decade, according to University of Wisconsin's Keith M. Woodhouse. Many in the New Left condemned the first Earth Day in 1970 as "the white liberal's cop out" and believed that a preoccupation with overpopulation, for example, was "racist hysteria."

Lefties and enviros merged into the modern-day progressive movement only when the New Left was persuaded that environmental degradation and social injustice were manifestations of the same greed-ridden system. Global warming, in a sense, combines this twin critique of capitalism on the grandest possible scale, indicting the rich West for bringing the world close to catastrophe by hogging a disproportionate amount of the global commons, leaving less for the developing world.

This is why, despite the demonstrated impossibility of imposing a global emission-control regime after the failure of the Kyoto treaty, liberals continue to demand that the West unilaterally cut emissions, even though this will arguably make little difference to global temperatures. It is a matter of cosmic justice, as far as they are concerned.

Indeed, if there is any doubt that liberal alarmism no less than conservative skepticism is driven by ideological commitments — and not a realistic assessment of actual risk and achievable solutions — Yale University's Dan Kahan research ought to put them to rest. He found that when geo-engineering — pumping sulfates into the atmosphere to deflect heat — is offered as the solution to climate catastrophe instead of emission restrictions, liberals become far more questioning of global warming science. Why? Because, presumably, it does nothing to curb Western greed. Conversely, geo-engineering makes conservatives far more accepting of the science, likely because it avoids Big Government.

So where does that leave us? If neither side can get past its ideological agenda, is there any possibility of getting it right?

Yes. In our adversarial legal system, for instance, neither party is expected to impartially weigh all the evidence. Rather, each mounts the best possible argument for its side, while vigorously questioning the other, leaving the jury to draw its own conclusions. The same is true for our political system. Liberals and conservatives don't need to overcome their biases and accept the other's case. Each simply needs to make the best possible argument for its own and question the other, letting the broader polity draw its own conclusions.

That's why ideological differences are to be cherished as assets — not scorned as liabilities — in a democracy. Ultimately, cacophonous ideological battles are far more likely to generate the right answers to tough issues rather than a bland consensus.