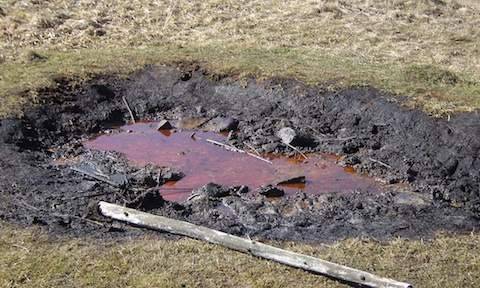 Crews sopped up the remains of about 10,000 gallons of crude oil that sprayed into Los Angeles streets and onto buildings early Thursday after a high-pressure pipe burst.

A geyser of crude spewed 20 feet high over approximately half a mile at about 12:15 a.m. and was knee-high in some parts of an industrial area north of Atwater Village before the oil line was remotely shut off, said Fire Capt. Jaime Moore.

A handful of commercial businesses near the border of Glendale was affected, as well as a strip club,  "The Gentlemen's Club," which was evacuated.

"There's significant damage to the nightclub due to the oil that seeped through the roof and through the walls," Moore tells KPCC.

The oil spill had “zero effect” on the nearby Golden Road Brewery, and there was no lingering smell of oil, owner Tony Yanow told KPCC. The nightclub was the only one of five affected businesses to suffer damage, Moore tells KPCC.

Plains released a statement on the spill:

"Early this morning, crude oil was released from a Plains All American pump station in the Atwater Village area of Los Angeles. The pipeline was promptly shut down; it appears the released crude oil has been contained. Although the actual volume has not been determined at this time, it appears the volume released is approximately 500 barrels or less. An investigation into the cause of the release has not been performed, but it appears the release resulted from a valve failure which caused a spray of oil near the immediate area that affected an adjacent business and some cars. The Los Angeles Fire Department along with company response personnel and other area first responders are on-site and are working to clean up the released oil."

They said they would provide an update later Thursday.

Local agencies are monitoring the oil spill to ensure it doesn’t contaminate nearby waters.

There were two sets of storm drains near the spill  one owned and operated by the City of Los Angeles, the other a private drain — and neither was impacted by the oil spill,  Jimmy Tokeshi, spokesman for the city’s public works department, told KPCC.

There are maintenance holes on the private property where the valves are located, but they’re part of a closed system that’s not connected to the storm drain system, he told KPCC.

Plains All American is now in charge of the clean up operation, and is required every two hours to inspect for any type of oil leak that may threaten the storm drain system or other water sources.

The Fire Department received a call about the spill at 12:16 a.m., Moore tells KPCC. The Department then contacted Plains to let them know to respond, Moore said.

Moore told KPCC that he couldn't fault Plains for its response and that there were cleanup crews at the scene within an hour of the company being notified. Moore also said that the company immediately shut off the oil flow, though residual flow kept oil coming out for 45 minutes.

Firefighters and hazardous materials crews responded to the spill. Several roads were closed.

While waiting for cleanup crews to arrive, the Fire Department got sand from a local concrete company and built a berm to contain the oil, Moore told KPCC. The berm was two-and-a-half feet high.

“If it weren’t for the local cement company that brought sand in to soak up all the oil, this could’ve been an environmental disaster,” said Tony Arranaga, spokesman for L.A. City Councilman Mitch O’Farrell, who represents the area where the spill occurred.

By dawn, an environmental cleaning company had vacuumed up most of the oil. The company was contracted by Plains, not the city, Moore tells KPCC. Crews put down absorbent material to sop up the remaining crude and then used high-pressure hoses to wash the streets with a soap solution.

West Coast Environmental assisted in the cleanup, according to a Fire Department blog post. The cleanup is expected to be completed within around 24 hours, Moore tells KPCC.

Four people at a medical business were evaluated with respiratory complaints, and two people were transferred to a hospital, Moore said. The two transported to hospitals were both women, according to the Fire Department spokesman Erik Scott.

There's still cause for concern, Sarah Sikich, science and policy director at Heal the Bay, tells KPCC. She said oil could potentially get into the city’s storm drain system, and then flow into streams, rivers and eventually the ocean.

“Oil really knows no boundaries once it spills,” she said in a phone interview with KPCC.

The L.A. County Department of Public Health issued a recommendation due to both the oil spill and the heat that those in the area take precautions to protect themselves from "extreme odors" from the oil.

“Cleanup of this spill is progressing, but individuals may experience discomfort from odors from the residual crude,” said Jonathan Fielding. “These odors may result in mild, temporary health impacts, such as eye, nose and throat irritation, headache, dizziness, or upset stomach. As the temperature rises today, these odors may become more prominent. Sensitive individuals, including children, seniors, and people with chronic disease such as heart or lung disease, should exercise caution, and limit their outdoor activities as long as odors persist.”

Officials previously said 50,000 gallons had spilled but that number was revised downward after the vacuuming began.

Scott said there was no "visible evidence" that the oil entered storm drains, which empty into the Los Angeles River. But he said it's possible that some oil seeped under manhole covers.

The 20-inch pipe burst at a transfer pumping station along a pipeline that runs from Bakersfield to Texas, Moore said.