Posted by plantitfilm on Monday, 19 May 2014 in Climate Change 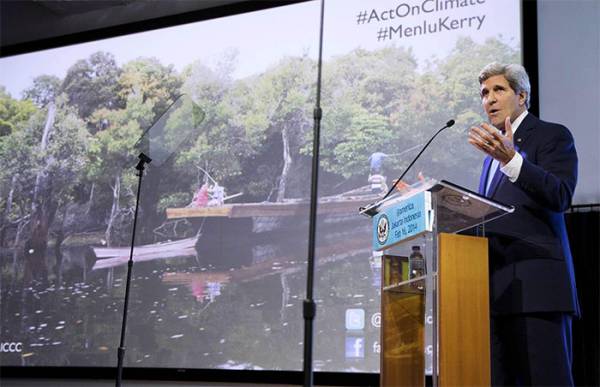 The rapidly changing climate poses a threat of sparking greater global conflict, U.S. Secretary of State John Kerry on Monday told the graduating class of Boston College, urging the graduates to play a role in pushing for new energy policies.

Citing recent reports from the United Nations and White House showing that a rising emissions of carbon dioxide from the burning of fossil fuels in contributing to a warming world, he warned of the possibility of climate-related conflict.

"Ninety-seven percent of the world's scientists tell us this is urgent. Why? Because if crops can't grow, there will be food insecurity. If there are stronger more powerful storms, things will change in a hurry," Kerry said at Boston College, where he received his law degree in 1976.

"Climate change is directly related to the potential of greater conflict and greater instability. I'm telling you that there are people in parts of the world, in Africa, today, they fight each other over water. They kill each other."

Kerry, who served as U.S. Senator for Massachusetts for 28 years before President Barack Obama named him secretary of state last year, also said the problem of climate change was a solvable one and cited humanity's successes in battling infectious diseases, including tuberculosis, malaria and AIDS, as evidence that technological solutions could work.

Kerry offered few specific policy recommendations in his 19-minute speech, but noted that investments in clean energy sources, which typically include technologies such as solar and wind power, could help in the effort to contain climate change.

An 800-page report released by the White House earlier this month showed how the consequences of climate change could play out on several fronts, including infrastructure, water supplies and agriculture.

"What's frustrating is that this challenge is not without a solution," Kerry said. "Not one problem I can think of today that we face in this country is without a solution. It's a question of capacity, willpower."