Posted by eljorita on Tuesday, 27 May 2014 in Wildlife Conservation

Entering a Wild Frontier: Testing Vaccines in Apes for Apes 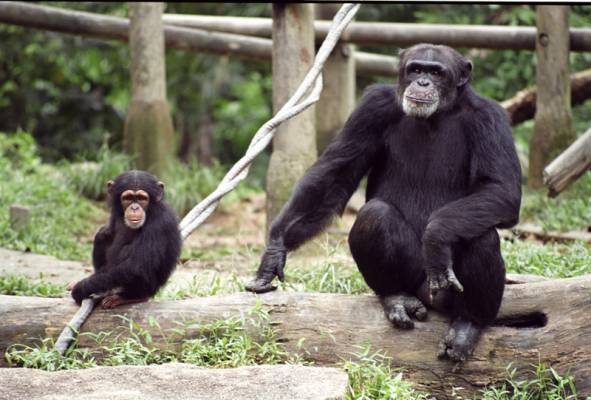 Chimpanzees will take part in a vaccine experiment that, for the first time, aims to help chimpanzees. Researchers at the New Iberia Research Center, a branch of the University of Louisiana, Lafayette, plan to inoculate six chimpanzees with a vaccine against Ebola, which is decimating wild ape populations. The experiment will not test whether the vaccine works, which would require injecting the animals with a "challenge" dose of the deadly Ebola virus. Rather, it will simply assess the safety of the vaccine and its ability to trigger an immune response.

Primatologist Peter Walsh, the driving force behind the experiment, ultimately wants to vaccinate wild chimpanzees and gorillas against Ebola, and he hopes this test will help him clear a few remaining hurdles. "The objective is to show the conservation community that the vaccine won't kill chimpanzees or gorillas," says Walsh, an ecologist who worked until recently at the Max Planck Institute for Evolutionary Anthropology in Leipzig, Germany. A study led by Walsh and published in the 8 December 2006 issue of Science documented that Ebola had killed about 5000 gorillas in the area his group studied in Gabon and the Republic of Congo. "Ebola has killed one-third of the gorillas in the world," estimates Walsh.

Walsh has pushed for vaccinating wild apes for several years and says he has met some steep resistance. "Vaccination is scary both in international conservation circles and to many people in Africa," says Walsh. But Max Planck primatologist and great ape conservationist Christophe Boesch, who has worked with Walsh in the past, supports his efforts. "Vaccination of wild apes is certainly a new and somehow contentious notion," says Boesch. "However, pristine nature is becoming rarer and rarer in Africa, and if we want apes to survive in Ebola-infected areas, vaccination is one of the few realistic solutions. Peter has the stamina to bring this very challenging project to completion, and I am happy to see the concrete steps starting soon."

The vaccine the chimpanzees will receive presents little risk. Developed by Integrated BioTherapeutics Inc. in Gaithersburg, Maryland, which hopes to develop a product to protect humans against biowarfare, the vaccine contains Ebola virus proteins in what's known as a viruslike particle that cannot copy itself or cause disease. In a monkey experiment published in the 15 November 2007 Journal of Infectious Diseases, investigators from the company and the U.S. Army showed that the vaccine completely protected five monkeys against a lethal challenge dose of Ebola virus. But monkeys are not great apes, and captive chimpanzees were the next logical rung in the testing process, especially given Walsh's desire to conduct vaccination of their relatives in the wild.

New Iberia plans to immunize the chimpanzees tomorrow and then 28 days later. The researchers will collect blood samples from the animals, which will require anesthetizing them. "There's a minimal risk there," acknowledges Thomas Rowell, who heads the New Iberia facility. But he stresses that the potential benefit to chimpanzees and other great apes offsets the risks. The tests will also look for Ebola antibodies triggered by the vaccine in chimp stools, which will mirror what Walsh hopes to do in the wild.

Walsh, who has consulted many experts about how best to immunize wild apes, for safety reasons does not want to anesthetize wild apes. Instead, he plans to use darts that contain the vaccine; similar darting has been used to treat wild gorillas with antibiotics. Collection of subsequent fecal samples should allow Walsh and his team to hunt for vaccine antibodies and to pluck out DNA to identify individuals.

The New Iberia experiment is taking place against a backdrop of increasing opposition to the use of chimpanzees in biomedical research. Researchers for many decades have turned to our closest relatives to test vaccines against a wide range of diseases, including polio, hepatitis B and C, respiratory syncytial virus, and AIDS. But this "animal model" largely has fallen out of favor, primarily because the ethical landscape has changed and costs have escalated. Several countries have banned all invasive biomedical research experiments with this endangered species, and the United States and Gabon remain the only two that house captive chimps for research and allow it.

The debate about chimpanzees in research went to a full boil in the United States last year. First, Congress began considering a bill, the Great Ape Protection Act, that would altogether ban this type of biomedical research. Proponents of the bill—including the Humane Society of the United States and primatologist Jane Goodall—teamed with then-New Mexico Governor Bill Richardson and launched a high-powered campaign over the fate of a colony of 186 "research" chimpanzees that live in Alamogordo, New Mexico, and are owned by the U.S. National Institutes of Health (NIH). Scientists have not conducted studies with these chimpanzees for several years, and when NIH announced that it intended to move them to a facility in Texas that again may use them in research, a furor broke out. At the behest of three U.S. senators, the National Academy of Sciences agreed in December to analyze the current and future need for chimpanzees in biomedical research, and NIH put plans for the Alamogordo chimps on hold. New Iberia's Rowell says the analysis will likely look at the impact such a ban would have on chimpanzee health by slowing development of products like an Ebola vaccine that could help both humans and apes.

If all goes well, Walsh expects to begin tests of the Ebola vaccine in Gabon later this year.