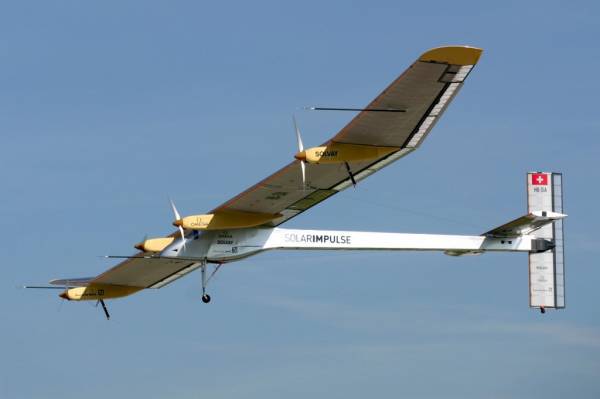 MOUNTAIN VIEW, Calif. (AP) — A solar-powered plane that has wowed aviation fans in Europe is preparing to fly across North America.

The Swiss creators of the Solar Impulse are announcing Thursday which U.S. cities the experimental plane will visit during its “Across America” tour that kicks off in May.

Bertrand Piccard and André Borschberg will display the aircraft and discuss the cross-country trip at a news conference at the NASA Ames Research Center in Mountain View.

The Solar Impulse is powered by about 12,000 photovoltaic cells that cover massive wings and charge its batteries, allowing it to fly day and night without jet fuel. It has the wing span of a commercial airplane but the weight of the average family car, making it vulnerable to bad weather.

Its creators say the Solar Impulse is designed to showcase the potential of solar power and will never replace fuel-powered commercial flights. The delicate, single-seat plane cruises around 40 miles per hour and can’t fly through clouds.

In 2010, the solar plane flew non-stop for 26 hours to demonstrate that the aircraft could soak up enough sunlight to keep it airborne through the night. A year later, it took it on its first international flight to Belgium and France.

Last year, the Solar Impulse made its first transcontinental voyage, traveling 1,550 miles from Madrid to the Moroccan capital Rabat in 20 hours.

Before its coast-to-coast American trip, the Solar Impulse will take test flights around the San Francisco Bay Area in April, officials said.

Piccard and Borschberg are planning an around-the-world flight in an improved version of the plane in 2015.

Piccard comes from a line of adventurers. His late father, Jacques, was an oceanographer and engineer who plunged deeper into the ocean than any other person. His grandfather Auguste, also an engineer, was the first man to take a balloon into the stratosphere.