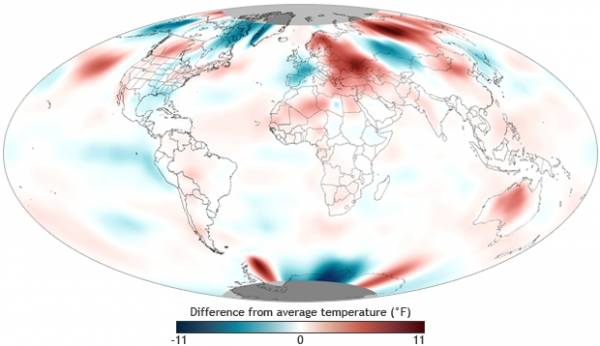 The map above shows temperatures relative to average across the globe for May 2013. Shades of red indicate temperatures up to 11° Fahrenheit warmer than the 1981–2010 average, and shades of blue indicate temperatures up to 11° Fahrenheit cooler than the average. As the red shaded regions demonstrate, most of northern Siberia, western Russia, northern and eastern Europe, and central Australia all experienced above-average May temperatures. Meanwhile, western Siberia, northeastern Kazakhstan, western Europe, southwestern Greenland, parts of the central and southeastern United States, and Alaska were notably below average.

For the ocean, the May global sea surface temperature was 0.88° Fahrenheit above the 20th-century average, tying with 2003 and 2009 as the fifth warmest for May on record. And, neither El Niño nor La Niña conditions were present across the central and eastern equatorial Pacific Ocean during May, with sea surface temperatures below average across the eastern half of the equatorial Pacific. According to NOAA's Climate Prediction Center, neutral conditions continue to be favored over the next few months.

The monthly report from the National Climatic Data Center has more information on May 2013climate conditions.