Posted by Joao Fonseca on Monday, 23 June 2014 in Ocean/Seas/Coastlines 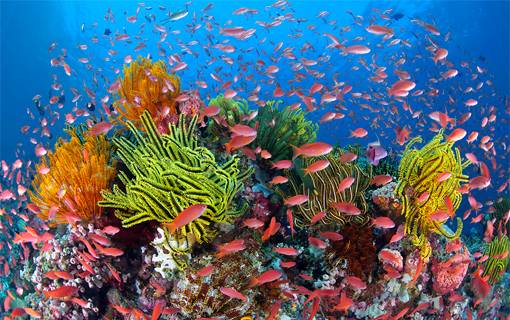 For the second year in a row, the World Heritage Committee has told Australia to better protect the Great Barrier Reef and address threats from port development, dredging and dumping. “The World Heritage Committee has resisted intense pressure from the Australian and Queensland Governments to water down its decision on the Reef,” said WWF-Australia Reef campaigner Richard Leck.“Instead, the Committee has put Australia firmly on notice to take stronger action to protect the Great Barrier Reef” “This is a victory for the millions around the world who say our Reef is not a dump”At its annual meeting (held this year in Doha) the World Heritage Committee decision:• Kept alive the threat to list the Great Barrier Reef as “world heritage in danger” in 2015 • Expressed concern and regret over the government’s decision to allow the dumping of 3 million cubic metres of dredge spoil in Reef waters at Abbot Point (despite the Australian Government’s attempts to have those words removed) • Indicated that the handover of federal environmental approval powers to the Queensland Government is premature “The Australian and Queensland Governments must take responsibility, lift their game and improve management of the Reef,” Mr Leck said.“If not they face the shame of having the Reef declared “world heritage in danger” in 2015, putting at risk thousands of tourism jobs.“Australia has clearly not lived up to the standards expected by the international community when it comes to protecting the Reef.” The World Heritage Committee is holding its annual meeting in Doha, Qatar this week and for the third year in a row the issue of Australia’s poor record in managing industrial port developments along the Reef coast has been on the agenda.“It’s clear that Australia must take concrete action, not just churn out more plans and reports, if we are to avoid seeing the Reef listed as ‘in-danger’ when the World Heritage Committee meets again in Germany this time next year,” Mr Leck said. “The first step must be to immediately ban the dumping of dredge spoil in the Great Barrier Reef World Heritage Area. Dredging and dumping for new port developments pollutes Reef waters, and the majority of Australians want to see an end to this out-dated practice.” “We’re also calling for the protection of undeveloped high conservation value areas, such as the Fitzroy Delta and Cape York, by excluding port development,” he said.