Germany Meets Half Its Energy Demand From Solar, Briefly 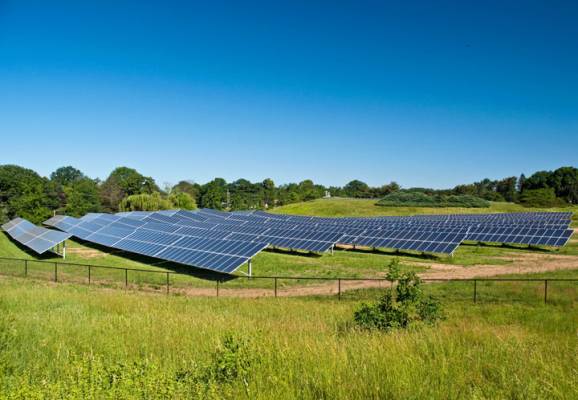 Solar power plants in Germany peaked at 22 gigawatts of output for a few hours on Friday and Saturday, yielding almost half the country's energy needs from the renewable resource and setting a new record in the process. The not-particularly-sunny country has long been a leader in solar power thanks to favorable policies like feed-in tariffs. In the wake of the decision to shutter all of its nuclear plants, solar power will need to play an even bigger role in the future. That 22 gigawatts of output is equal to about 20 nuclear reactors.

"Never before anywhere has a country produced as much photovoltaic electricity," said Norbert Allnoch, director of the Institute of the Renewable Energy Industry in Muenster, according to Reuters. And some think that Monday will have been even better: because it is a holiday in Germany and most workplaces are closed, there is the possibility that all of Germany's power needs will be supplied by the sun, at least for a couple of hours.

This would of course be the first time that a country of that size, with large power demands, could produce enough renewable energy to actually run the whole ship. But it is not the first time for any country -- Denmark, among the world leaders in wind energy, sometimes does produce more energy from turbines than the country can use. And on a more localized level, even parts of the U.S. see similar effects: in 2010 I spoke with a representative from PJM Interconnection, a regional transmission operator, who said that there are times of day when demand is low and the wind blows strongly when the price of electricity can actually go negative. In other words, supply exceeds demand.

That negative price includes both renewables and traditional generation, of course, but the fact is that renewable resources are starting to pile up in a number of areas. This past winter in Spain was another example: the country got almost 30 percent of its power from wind over a full two-week period at the beginning of February.

These isolated milestones of renewable generation do raise the specter of storage, however. Without good options for storing excess power, any extra supply is essentially lost. There are other solutions on well-connected grids -- Denmark can export some of that wind power to the rest of Europe, and work is continuing on ideas like vehicle-to-grid (V2G) storage, where a fleet of electric cars could act as batteries for renewable energy. And though records like Germany's are great, we are still a ways off from consistently deriving such large percentages of power from renewable sources.