Posted by voice on Wednesday, 04 January 2012 in Solar 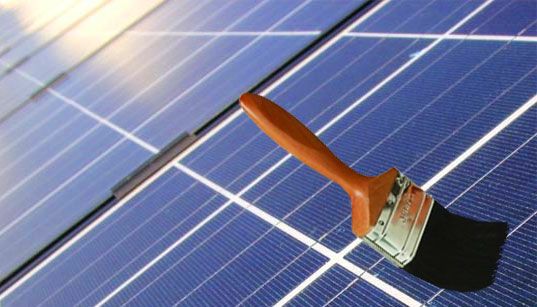 Government agencies using solar power may soon be ditching their panels in favor of paint brushes. Researchers at the University of Notre Dame’s Center for Nano Science and Technology (NDnano) have developed a “solar paint” that can be applied on to a conductive surface, such as transparent conducting glass or plastic, that turns the energy of the sun into electricity.
The project consisted of taking nano-sized particles of titanium dioxide, coating them with either cadmium sulfide or cadmium selenide and suspending them in a water-alcohol mixture to create the paint. The semiconducting nanoparticles — called quantum dots — were mixed into a one-coat spreadable paste that can generate power, without using any special equipment.

“The major accomplishment here is taking a multi-step process — photoanode preparation — which typically can take days to finish and transforming it into a simple paint approach that can be completed in under an hour,” said Ian Lightcap, a doctoral candidate who worked on the research.
The team that worked on the solar paint was a small one, consisting of Lightcap, Prashant Kamat, professor of science in chemistry and biochemistry and an investigator at NDnano who led the research, and Matthew Genovese, an undergraduate student. The work was funded by the U.S. Department of Energy’s Office of Basic Energy Services.
Lightcap said that while the concept of electricity-generating paint isn’t new, he wasn’t aware of any published accounts that detailed other successful attempts at a one-step application to make a solar cell.
Called “Sun-Believable,” the paint is still a ways from being commercially available. But its development could ultimately lead to a new generation of inexpensive power generation.
“This is really the first step in making something you can buy and paint onto some conducting surface and generate electricity from it,” Lightcap explained, adding that “the question is not if it can be done, but when it will be economically feasible.”
Challenges Remain
Solar cells have three parts — the photoanode, the conducting material and the counter electrode. While the NDnano team concentrated on developing the paint for the photoanode, work still needs to be done to improve the conducting material that is sandwiched between that and the counter electrode. Currently, Lightcap said the process uses an electrolyte liquid solution for the cell and he’d like to replace that with a solid state conductive material, which should improve the overall stability of the solar cell.
In addition, a number of other hurdles still need to be overcome in order for the paint to hit the mainstream. Chief among those is improving the light-to-energy conversion rate. According to Kamat, the best results researchers on the project have achieved is a 1 percent conversion efficiency, which falls well behind the 10  to 15 percent efficiency achieved by commercial silicon solar cells. “This paint can be made cheaply and in large quantities,” Kamat said in a statement. “If we can improve the efficiency somewhat, we may be able to make a real difference in meeting energy needs in the future.”
When asked if he could give an example of what the paint could actually power right now, Lightcap was firm that while it works in the lab, the solar paint isn’t ready for any sort of commercial or residential use.
“To compete with solar panels, we probably need to get up to the 10 percent range,” Lightcap admitted, referring to the light-to-energy conversion efficiency rate. “Right now, we’re showing proof of concept.”