Posted by tvernile on Monday, 30 June 2014 in Wildlife Conservation 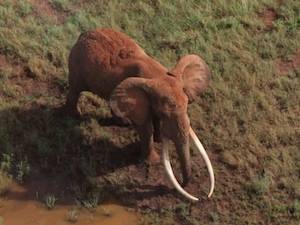 One of the world’s largest — and one of Kenya’s most famous — elephant bulls died recently in an attack by poachers.

At about 45 years old, the elephant, named Satao, was famed for being one of the last “great tuskers” —  elephants with long, massive tusks that reach the ground. His impressive size and 6.5-feet-long tusks made him easily identifiable from the air by authorities and researchers as he roamed his home in Tsavo East National Park in southeastern Kenya. Some believe Satao had learned to hide himself and his tusks when people came near, which helped him survive as long as he had with his legendary ivory.

Sadly, Satao was found dead on June 2. He had been shot with a poisoned arrow and was missing his tusks and much of his face, reported the Tsavo Trust, a wildlife organization in the area.

According to the Kenyan Wildlife Service (KWS), poachers have killed 97 elephants this year in Kenya, or less than one percent of the country’s elephant population. Many Kenyans and conservationists believe the numbers are much higher, however, as accounts of poaching in the area abound. A June 13 report by the Convention on International Trade in Endangered Species of Wild Fauna and Flora states that poachers killed more than 20,000 elephants across Africa in 2013. Although this number is slightly lower than previous years, “the rate of poaching is still far too high and unsustainable,” said Philip Muruthi, senior director of conservation science at the African Wildlife Foundation, in a press release. In fact, at the time of Satao’s birth in the 1960s, the elephant population in Kenya exceeded 275,000, but today, only about 38,000 roam the country. These numbers and the high street value of ivory — currently tens of thousands of dollars per tusk and higher than that of gold — cause concern that elephants could go extinct in Africa in just over a decade.

Kenyans and people all over the world grieve the loss of the iconic bull, which follows the death of Mountain Bull, another well-known Kenyan elephant that also fell prey to poachers. KWS has announced plans to heighten surveillance across the country in response to the recent attacks.