Posted by plantitfilm on Monday, 07 July 2014 in Earth Violators 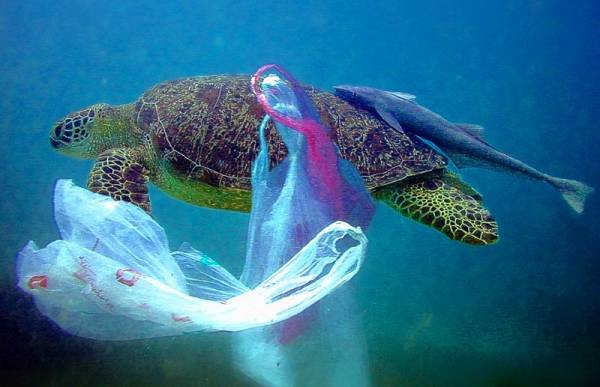 According to a new study, 99% of plastic waste that enters the ocean cannot be located. While initially hearing that there's less plastic in the ocean than we believed sounds like great news, it's actually a frightening prospect. After all, if the plastic isn't in the ocean ... where is it going?!

A team from the University of Western Australia spent a couple of years sailing around the world in five vessels hoping to accurately record just how much plastic is actually in the ocean. Although researchers expected to discover millions of tons, they were surprised to calculate that they only calculated about 40,000 tons of plastic floating on the surface.

Rather than rejoicing, scientists are concerned that this is a sign that fish and other forms of sea life are eating the plastic. We already know that as the sun breaks down plastic into smaller pieces, that plastic looks more like food to fish and they try to eat it. With so much plastic apparently missing, it's not a leap to guess that marine life is regularly making a meal of human garbage.

Scientists point out that plastics attract the ocean's toxins, so when fish eat them, they're essentially consuming poison. While the health of the fish is a concern, this possibility has massive repercussions for the whole food chain. Fish that eat that fish than take the mercury and DDT into their own bodies. Humans and land animals that eat those fish, in turn, are also exposed to these toxins.

It might not necessarily be that bleak, though. Some hope that the fish just wind up dispelling the plastic from their bodies (think pooping or regurgitation) would help to minimize the effects, although further research will need to be conducted to confirm if that’s the case.

Notably, the researchers concede that the plastic could be disappearing for multiple reasons, including being weighed down and sinking to the bottom or slowly breaking into undetectable pieces. Still, they assert that it is "indisputable" that at least a large portion of the plastic is being consumed by marine life.