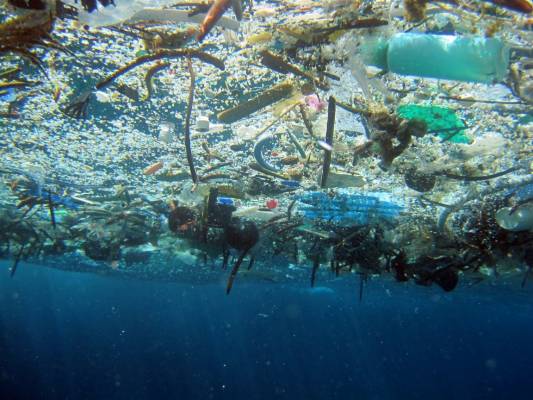 In the Pacific Ocean, four ocean currents merge to form the North Pacific gyre, also known as the North Pacific Subtropical High, which spans the western US to Japan, and Hawaii to California. This enormous rotating vortex has collected floating garbage from across the Pacific, but much of the debris can typically be found in the calm center of this rotating area, often referred to as the "eastern Pacific garbage patch." Keep in mind, however, that this is no island or blanket of trash that can be seen with satellite or aerial photographs—most of the floating trash is tiny pieces of plastic, many of them so small as to be invisible to the human eye.

Its vast size and the small size of the trash left the garbage patch largely unnoticed until the early 1990s, when Captain Charles Moore, head of the Algalita Marine Research Foundation, sailed through a rarely traveled area between Hawaii and the mainland. Over the course of a week, despite being hundreds of miles from land, Moore watched a continuous stream of plastic trash float by. Although fishermen and sailors have noted the debris in this area for years, it was Captain Moore who brought the area into the public sphere.

While the garbage patch has received a lot of attention because of its size, it is not the only area where marine debris can be found: marine debris affects waters and coastlines around the world. Animals frequently become entangled in large pieces of debris, and can be cut, drowned, or slowed down by dragging the extra weight. Additionally, heavy gear, such as fishing nets, can damage reefs and other important habitats.

Because of its durability, low cost, and our increased use in recent decades, plastic makes up the majority of marine debris seen on shorelines and floating in oceans worldwide. This creates a difficult problem because most plastics are not biodegradable (bacteria don't break them down into simple, harmless components the way they do paper or wood). Instead, as plastic ages, the sun's light and heat break it into smaller and smaller pieces.This tiny plastic confetti, along with larger pieces of floating plastic, creates a big problem. Birds, like the laysan albatross (Phoebastria immutabilis), and filter feeders that strain food out of the water may mistake plastic for plankton, fish eggs, or other food. On remote Midway Atoll, albatross chicks die of starvation and dehydration because their parents have unwittingly fed them bottle caps and cigarette lighters, which they can't digest. Even in the protected waters surrounding the Northwestern Hawaiian Islands, at the Papahānaumokuākea Marine National Monument, our trash threatens endangered species like Hawaiian monk seals and green sea turtles.

Scientists with agencies such as NOAA, and other institutions around the world, continue to research the impacts of marine debris, including the emerging area of microplastic debris (plastic that is less than 5mm) and its impacts on our marine ecosystems.