Posted by acox on Wednesday, 03 October 2012 in Air Quality 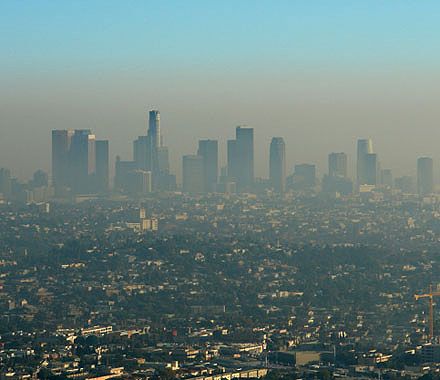 About 17 million Americans live in areas afflicted by all three air pollution hazards.

This worries scientists since research suggests air pollution threatens human health — and not just the lungs.

On days in which smog levels spike, there's an increase in hospital admissions for respiratory illnesses, heart attacks and stroke in the two or three days following it, said Michael Jerrett, a professor of environmental health sciences at University of California, Berkeley's School of Public Health.

This is due, in part, to insidious changes caused by chronic exposure to pollution. According to Dr. Norman Edelman, chief medical officer of the American Lung Association, small particles of pollution can lodge deep in the lungs, triggering an inflammatory process that, over time, can spread elsewhere in the body and damage blood vessels and the heart.

The report found that the cities with the worst air include: Los Angeles-Long Beach-Riverside; Bakersfield-Delano; Visalia-Porterville; Fresno-Madera; Sacramento-Arden-Arcade-Yuba City (Calif.-Nev.); Hanford-Corcoran; San Diego-Carlsbad-San Marcos; and Merced — all of which are in California with the exception of one county just across the border in Nevada.

But there is some good news, said Janice Nolen, director of national policy for the American Lung Association. The majority of cities with polluted air have actually improved. Nolen credited the Clean Air Act, which, since its passage more than 40 years ago, has forced car and diesel truck manufacturers and coal-fired power plants, among others, to reduce emissions.

"We are trying to remind folks that the Clean Air Act has saved hundreds of thousands of lives," Nolen said. "Without the clean up, we would have a lot more pollution and a lot more disease and dying. We are very concerned about efforts to roll it back."

Although some attack the Clean Air Act as unnecessary, experts disagree. Jerrett explained that the research linking pollution to death and disease comes from animal experiments, human volunteers who go into pollution chambers where physiologic response is measured, changes in cell cultures when cells are exposed to pollution "and quite a few epidemiological studies."

"The body of evidence is large enough that if it's not fully evidence of causality, it's certainly strongly suggestive that pollution affects health in many adverse ways," Jerrett added.

Why does California, with its history of tough regulation, have such a pollution problem? It's a combination of factors, according to Jerrett. The state has lots of sources of emissions, including burgeoning car and truck traffic, major ports, oil refineries, wood and agricultural burning, and residential heating and cooling.

In areas such as Los Angeles, prevailing wind patterns and mountain ranges trap polluted air that's then baked in the sunshine, leading to the formation of smog.

The "State of the Air 2011" report uses state and local data reported to the EPA in 2007 to 2009. Measurements include ozone, year-round particle pollution and short-term pollution spikes.