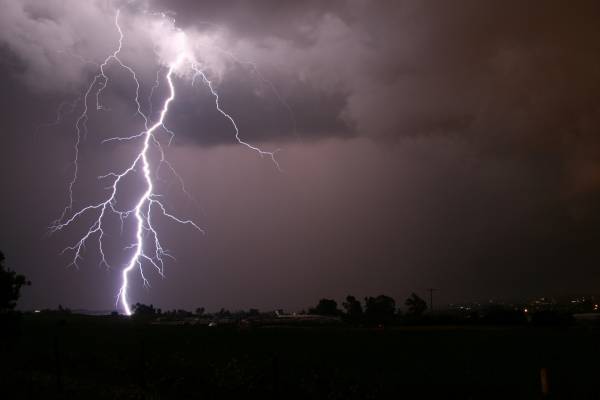 A unprecedented lightning storm recently hit Venice Beach, killing one and injuring at least 13 others. Unusual weather events like this could be evidence of our impact on the planet, and are not to be taken lightly. The person killed was only 20 years old, swimming in the water with no forewarning. It is truly a horrible loss and we hope to hear more from meteorologists and scientists on possible causes for the storm. Please remember to stay safe and take shelter at the first sound or sight of a storm.

Agelica Roquemore made the long drive from Bakersfield to Venice Beach on Sunday, planning to frolic in the waves with relatives during her first visit to the famed beach town's white sand and eclectic shops.

But in an instant, the day at the beach turned into a scene of panic when a perfect storm of rare weather sent lightning bolts and booming thunder from a darkened sky.

The midafternoon lightning strikes killed a 20-year-old man who was pulled from the water and injured at least seven others — one of them critically. The 15-minute thunderstorm struck as more than 20,000 people were visiting the southern portion of Venice Beach, where the lightning hit, sending beach-goers scrambling for cover and nearly six dozen rescue workers into action.

"My hair was standing up," Roquemore said. "You could hear everybody screaming."

Bill Patzert, a climatologist with the NASA Jet Propulsion Laboratory, said the lightning strikes that hit the Southern California coast Sunday from San Diego to Venice are extremely rare. The West Coast has the lowest incidence of lightning strikes in the nation; the odds of being hit are 1 in 7.5 million in California compared to 1 in 600,000 in Florida, the nation's "lightning champion," he said.

He said an intense high-pressure system pulled an unusual mass of hot and moist air from Mexico and the Gulf of California to the coastal areas, creating the unstable atmospheric conditions that produced the lightning. Normally, he said, those air masses travel no farther west than the high desert and mountains.

"This was a sneak attack that took everybody by surprise," he said. "Coastal Southern California is virtually lightning-proof. Because it's so unusual, people are not sensitized to the dangers."

A National Weather Service analysis of lightning deaths from 2006 to 2013 found that most fatalities occurred during leisure activities, and most victims were males between ages 20 and 29.

This was a sneak attack that took everybody by surprise. ... Southern California is virtually lightning-proof. Because it's so unusual, people are not sensitized to the dangers.

- Bill Patzert, a climatologist with the NASA Jet Propulsion Laboratory

The Los Angeles City Fire Department deployed 47 firefighters, eight ambulances and five fire engines to the 3800 block of Ocean Front Walk in Venice after receiving the first call for aid at 2:21 p.m., said fire spokeswoman Katherine Main. Firefighters set up a triage area on the south end of the parking lot from Venice Pier.

All told, Main said, firefighters responded to medical complaints by 13 beach-goers, eight of whom were transported to area hospitals.

The beachfront in Venice was hit by at least four direct lightning strikes about 2:20 p.m., said Stuart Seto of the National Weather Service.

L.A. County Fire Capt. Brian Jordan advised anyone in the water at the time to see a physician, since electrical burns can sometimes have delayed effects.

The name of the 20-year-old victim killed Sunday was not released pending notification of relatives. Authorities said the man was reported to be floating in the water by a witness, and was not breathing when retrieved.

A second victim in critical condition was a 55-year-old male who had been surfing, said Capt. Danny Douglas, of the L.A. County Fire Department Lifeguard Division.

Witnesses said the thunder and lightning were so explosive that it shook homes, triggered car alarms and set dogs barking. Some said they saw lightning as far away as Los Angeles International Airport about 30 minutes before the thunderclaps in Venice. Others said they had no warning at all.

Danielle Real, 15, and Paige Banaga, 13, said they were swimming off Fleet Street at Venice Beach when they heard an explosion and felt the water churn. Frightened, they swam to shore and saw people screaming and whistling for lifeguards as a man lay in the shore break

A bystander on the beach began administering CPR to the victim, Real said, until lifeguards and then firefighters took over. An ambulance came and whisked him away.

"His eyes were closed. He wasn't responding," Real said. My hair was standing up. You could hear everybody screaming.

Giovanni Alonzo, a 14-year-old who spent the day fishing, was at the edge of the pier helping someone rig a line when he said he saw a white flash.

"I just saw a big old flash of light right over my head then my hair was tingling, and then there was this huge crash of thunder," he said.

Alonzo said he joined a throng of people who rushed off the pier and back to the beach. There, he watched eight lifeguards swim out in search of another victim.

Gabe Anderson, 28, was eating a turkey and ham sandwich for lunch on the roof of his beachside triplex Sunday about 3 p.m. when a single lightning strike clapped down on the water.

"It was all blue skies, except there were some dark clouds coming from the south," he said. "Then just one big crack of lightning — pretty unexpected."

It "shook the house," he added of the first strike, as he relaxed on a towel on the sand. "It set off a couple car alarms and dogs started barking. It was really close."

Vern L. Williams said he'd been fishing on the pier for decades and was used to seeing threatening clouds roll in from the ocean. But when the cloud cover closed in, he started to worry.

One of the bolts struck a light post at the edge of the pier, less than five feet from where he'd been fishing.

"I dove to the floor to the concrete," said Williams, 43, of Los Angeles. "That ain't nothing to play with."