Posted by danielcaleb on Monday, 04 August 2014 in Water Conservation 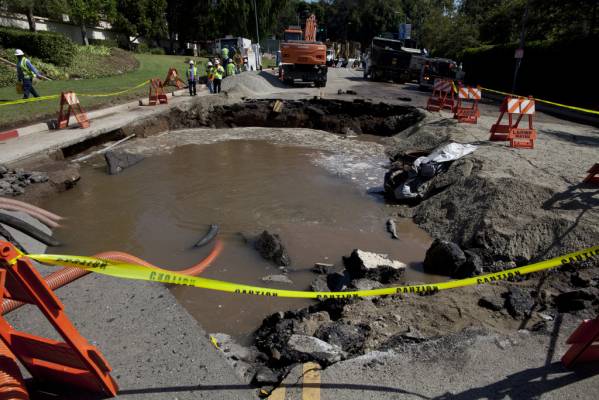 A broken water main spilled 20 million gallons of water onto the streets near the University of California, Los Angeles, Tuesday. To put that into perspective, here are some other things the water could have been used for:

20 million gallons of water would last for thousands of years if used for ordinary household tasks.

If a shower uses 25 gallons of water (2.5 gallons per minute x 10 minutes) and the average American takes one shower a day, it’d take about 2,192 years to use 20 million gallons.

If the water was used only for flushing a toilet, it would last even longer. Assuming the toilet is newer and flushed five times per day, it’d take roughly 6,849 years to go through as much water as was lost near UCLA Tuesday. Or, 20 million gallons could have been used for a single lifetime of toilet flushes for about 85 people.

Using the water in a dishwasher would stretch it out nearly as long as recorded human history. Assuming your dishwasher is newer and uses 5.8 gallons of water per cycle, 20 million gallons would last about 9,447 years.

Kitchen faucets in the U.S. are now limited to using 2.5 gallons per minute or less. So, if you just turned the faucet on and let it run, it’d take 8 million minutes to use up 20 million gallons — or just over 15 years.

If the water flooded the Empire State Building, it would have filled the first several floors.

Converted from gallons, the water that spilled near UCLA adds up to about 2.7 million cubic feet. The Empire State Building stands 1,250 feet at the top floor (below the antenna) and has 37 million cubic feet of space. That means the spilled water in L.A. would take up about 7.3% of the total volume of the Empire State Building. If the building were simply a big empty box with uniform sides, the water would fill up about 91 feet, or the first 6 or 7 floors. Of course, the Empire State building is widest at its base — and all the stuff on the inside also occupies some of the total space — so it’s hard to say precisely where the water would hit.

20 million gallons of water is enough to produce tons and tons of food.

The amount of water that poured onto the street (and into nearby buildings) in L.A. was enough to produce hundreds of thousands of bananas, apples and other fruits, based on data from The Water Footprint Network. It also could have been used to make large amounts of wine, pizza, and eggs.

20 million gallons of water could provide three lifetimes worth of hamburgers.

The Center for Investigative Reporting (CIR) and the EPA both estimate that it takes about 1,800 gallons of water to produce a pound of beef. So, that’s about 600 gallons for a typical hamburger. That means the water that poured out near UCLA could have been used to produce about 33,333 hamburgers. According to CIR, the average American eats 156 hamburgers per year, which means it’d take nearly 214 years to eat all that meat — or about three lifetimes.

Coincidentally, the water main break and subsequent flooding happened the same day California got dire news about its ongoing drought.

The drought in April.

As of Tuesday, nearly 60% of California was experiencing “exceptional drought,” the most severe of the U.S. Drought Monitor’s categories. All of the rest of the state was experiencing some lesser level of drought. The drought has been ongoing for three years, depleting reservoirs and ravaging the state’s soil and agriculture. Making matters worse, a widely hoped-for major El Nino — which would have brought need moisture — is looking less likely.