Posted by Chad on Thursday, 07 August 2014 in Climate Change 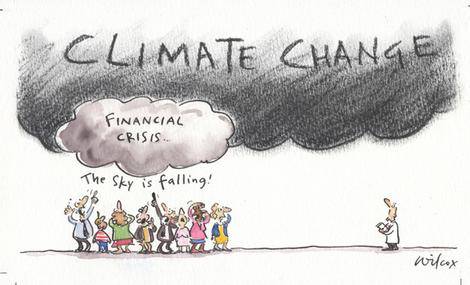 This may confirm suspicions that many of us have already had. Besides leading the world in consumer debt and military spending, the U.S. can now add climate denial to that list. That is, according to aGlobal Trends survey by the U.K.-based market research firm Ipsos MORI. The study polled 16,000 people in 20 leading countries on eight different topics, including the environment.

Not only was the U.S. last, but it was last by a considerable margin. Consider the following question: “To what extent do you agree or disagree, the climate change we are currently seeing is largely the result of human activity?” A mere 54 percent of respondents from the U.S. agreed. Compare that with 93 percent from China and 84 percent from both Argentina and Italy. India, France, Turkey, Spain, Brazil, Belgium, South Korea and South Africa all scored 75 percent or higher. Other similar questions yielded similar results. These results were in alignment was data compiled by Pew Research a year ago, which examined the issues that people in various countries considered the greatest threats.

Tied for second-to-last with 64 percent were Great Britain and Australia. What do these three English-speaking countries have in common? Among other things, global media holding company News Corporation, the world’s second-largest media conglomerate, owned by Rupert Murdoch. Canada, which is also blessed with Murdoch’s version of the news, was only slightly better, with 71 percent agreeing.

Respondents who answered “agree” when asked “To what extent do you agree or disagree, the climate change we are currently seeing is largely the result of human activity?”
Data courtesy Ipsos MORI, graph credit RP Siegel

Riley Dunlap, an environmental sociologist at Oklahoma State University is not surprised. “It’s the countries where neo-liberalism is most hegemonic and with strong neo-liberal regimes (both in power and lurking on the sidelines to retake power) that have bred the most active denial campaigns — U.S., U.K., Australia and now Canada.

That certainly seems to be the case here in the U.S. A study by Climatic Change, (cited by Mother Jones), describes 91 climate change counter movement (CCCM) organizations operating in the U.S., funded by a total of 140 foundations, to the tune of $900 million. The U.S. clearly has more big players with more to lose by acknowledging the reality of what is happening to our planet and why. Many of them, will, no doubt, flock to events like the Heartland Institute’s 9th International Conference on Climate Change, in, where else but Las Vegas? The event was billed as “biggest gathering of global warming skeptics in the world.” Good news for those who couldn’t make it. I understand that the Flat Earth Society is now accepting new members.

While the 32 percent of those surveyed who dispute the linkage between human activity and climate change are in the minority (14 percent say they are not sure), they represent a vocal minority indeed. Just look at the comments beneath any article about climate change (including, I predict, this one) and you will find a panoply of opinion-wielders, devoid of any scientific background, but ready to fight all comers on the issue, parroting, no doubt, the rhetoric and tone of Rush Limbaugh and his ilk. This brings us to another correlation. How does our ranking on this question match up with our international standing in education, when it comes to, say … science?

According to the 2012 Program for International Student Assessment (PISA), which measured the performance of high school students from 35 countries around the world on standardized tests, the U.S. ranked 27th, averaging 497 points in science, and dead last in mathematics with a score of 481. Who scored first? China did, in both categories, with scores of 613, and 580, respectively. Not all of the other countries followed suit, but still, there might just be a connection there. People who understand science are more likely to understand the difference between facts and opinions.

We’ve gotten our report card and the grade was not a good one. What do we do to compete with the Limbaughs and Kochs of this world to spread the message that is so vitally important to those people who are so unwilling to believe it?

RP Siegel, PE, is an author, inventor and consultant. He has written for numerous publications ranging from Huffington Post to Mechanical Engineering. He and Roger Saillant co-wrote the eco-thriller Vapor Trails. RP sees it as his mission to help articulate and clarify the problems and challenges confronting our planet at this time, as well as the steadily emerging list of proposed solutions. His uniquely combined engineering and humanities background help to bring both global perspective and analytical detail to bear on the questions at hand.