Posted by jonehopp on Monday, 11 August 2014 in Wildlife Conservation

Chinese Starting to Turn off of Shark Fin Soup 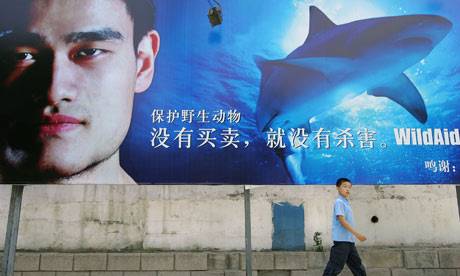 Shark fin soup, one of China's most famous dishes, has fallen dramatically out of fashion after a high-profile campaign by anti-cruelty activists.

Wealthy Chinese have supped on shark fin soup, a gelatinous broth, since the Ming dynasty; it is a staple at wedding banquets and other special events.

But younger Chinese are now firmly rejecting the dish after an advertising campaign fronted by Yao Ming, the former basketball star.

The trade in shark fins in Guangzhou, the southern hub of the industry, has fallen by 82 per cent in the past two years according to WildAid, the US group behind the campaign.

It added 85 per cent of Chinese diners surveyed online said they had given up shark fin soup in the past three years. Two dozen airlines and five of the biggest hotel groups have also taken it off the menu.

"We have shark fin soup, it is a speciality of our restaurant," said a manager at Bai Family Courtyard, one of Beijing's foremost purveyors of "imperial cuisine".

"But customers seldom order it," he added. "And the number who are ordering it is falling. We are considering whether we should take it off the menu or not."

A branch of the Noble House restaurant chain in northern Beijing said they had taken it off the menu "several months ago".

Hu Wanli, a seafood wholesaler in the southern city of Dongguan, said he had stopped selling fins.

"I do not know anyone who is still selling shark fins. I think it might be illegal now? But our customers, the restaurants, stopped asking us for shark fins a long time ago. The market has fallen."

In Beijing, another wholesaler said his supply had dwindled. "There used to be lots of people eating this, the market was large and I could offer my clients large quantities whenever they wanted. But now if you ask, I only have a few kilograms to hand. If you need more, you'll need to wait, and leave a deposit too," said Huang Qiongying.