Posted by thatsenough on Sunday, 07 September 2014 in Earth Violators

Your Plastic is in the Ocean 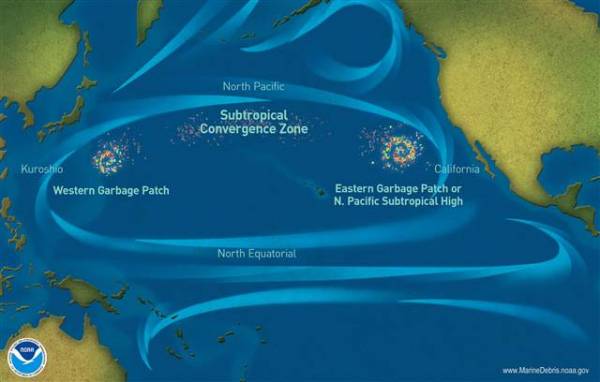 Who's flushing plastic pollution into the oceans, creating tiny time bombs that kill fish, birds and sea turtles ingesting what they think is food? That question has been around since 1997, when the "Great Pacific Garbage Patch" was discovered, and a new mathematical model could provide the tool needed to track down the culprits.

The model shows that pollution can cross what scientists thought were boundaries between oceans and especially its five gyres — large circular currents that are now known to trap floating debris in what have been dubbed garbage patches. Most of that trash is not even visible: It's tiny plastic pellets floating at or just below the surface.

"The breaking of the geographic ocean boundaries should shift the way people think of where oceans begin and end," modeler and mathematician Gary Froyland told NBC News. "The interactions that we've shown between the different oceans shows that no ocean is isolated and that local effects can have impacts far from the source."

Froyland and two colleagues at the University of New South Wales in Sydney, Australia, described their model in a paper published Tuesday in the peer-reviewed journal Chaos.

The work builds off an earlier, but less sophisticated, online tool (adrift.org.au) that allows users to project how plastic pollution travels in ocean currents.

The trio's math comes from a field known as ergodic theory, which has been used to study interconnectedness — think complex systems like the Internet, or even humanity.

For their model, the team divided the entire ocean into seven regions whose waters mix very little. Their projections tracked well with existing ocean circulation models and refined those to the point where they found that parts of the Pacific and Indian oceans are actually most closely coupled to the south Atlantic, while part of the Indian Ocean really belongs in the South Pacific.

A follow-up study will look at how porous those boundaries are. "We first wanted to see where the boundaries are, the next step is to study the amount of plastic crossing these boundaries," said Erik van Sebille, an oceanographer with the team.

Scientists not involved in the modeling welcomed the tool.

"I could imagine using their model to generate hypotheses about the likely source regions of debris in each of the 'garbage patches' that could be tested with on-the-ground sampling in these coastal regions," said Kara Lavender Law, an oceanographer with the Sea Education Association in Woods Hole, Mass.

"We already know that once debris leaves a harbor or coastline it is fairly quickly carried to the open ocean to these subtropical accumulation zones," she adds, "but what we might not have guessed is that debris in the accumulation zones may have originated from the next ocean basin over."

For Spanish marine ecologist Andres Cozar Cabanas, who published a study last July that mapped plastic ocean debris across the globe, the model shows that plastic pollution "is a global issue that can be effectively addressed only … at a global level."

That's exactly how the Aussie trio want the tool to be used. "At a political level," says Froyland, "the realization that even the garbage patches exchange garbage may make governments realize that 'we're all in it together,' hopefully producing some global action."