Posted by Tiny on Monday, 15 September 2014 in Transportation 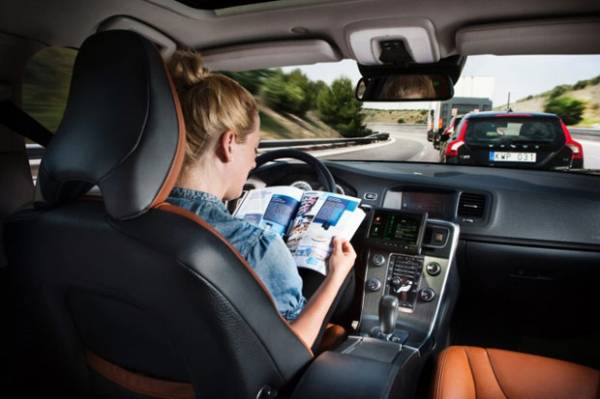 Excitement around connected and autonomous vehicles has been building for years with consumers interested in the convenience of never having to touch the steering wheel and governments anticipating significant improvements in road safety. It's presumed that these technologies will also have energy efficiency and emissions reductions benefits, but only recently have experts been able to quantify them.

A recent report by the Intelligent Transportation Society of America projects that so-called intelligent transportation systems (ITS) could achieve a 2 to 4 percent reduction in oil consumption and related greenhouse gas emissions each year over the next 10 years as these technologies percolate into the market.

"I think what's special about this report is it's the first time anybody sat down to try to put real sustainability benefit numbers to these technologies," said Matthew Stepp, executive director of the Center for Clean Energy Innovation at the Information Technology and Innovation Foundation, which hosted an event last month to launch the ITS America report.

"For the last few years, the auto industry and environmental advocates have said these smart transportation technologies will have first- and second-order benefits that will reduce carbon and make cars more efficient, but no one put pen to paper to calculate the benefits," he said.

The study examined fuel savings from 16 emerging transportation technologies, such as adaptive cruise control, eco-navigation, wireless communications to improve the efficiency of existing transportation infrastructure, such as traffic light synchronization. It also calculated the expected fuel savings from several alternative fuel technologies, which benefit from tools for tracking fuel use and state of electric charge.

"At the end of the day, what's going to truly decarbonize the transportation system is when we move to low-carbon fuel or completely battery-powered vehicles," which will take decades to see widespread adoption, said Stepp. "What the smart transportation technologies allow is to bend the carbon curve down in the intermediate time frame."

How one car may drive others
Some of these technologies are already producing significant sustainability benefits. The Smithsonian Institution, for instance, reduced the fuel consumption on its fleet of 1,500 vehicles by 53 percent by using GPS tracking and wireless communication to better manage its vehicles.

In Ellicott City, Md., a smart parking system that uses sensors to detect when parking spaces are open and sends the information to drivers in real time reduced the time they spent looking for parking spots by 21 percent, leading to associated emissions and fuel savings. Los Angeles County, Calif., introduced a traffic signal synchronization program to improve the throughput of vehicles that resulted in saving 31.3 million hours of travel time, 38 million gallons of fuel and 337,000 metric tons of carbon dioxide per year.

At ITS America's 2014 World Congress last week in Detroit, Honda Motor Co. showcased its next generation of ITS technologies, including short-range communication between vehicles and pedestrians' or bicycle riders' cellphones, fully automatic highway driving and V2V "virtual tow"—a blend of connected and automatic car technology that enables a driver to request assistance and then virtually link up with and trail another vehicle.

This suite of technologies fits along a spectrum from more passive, see-and-react types of systems to interoperable systems where vehicles can communicate across brands and from farther away, said Sue Bai, senior engineer at Honda R&D.

In one of the scenarios Honda is testing, the first car traveling in a group of three slams on the brakes to avoid hitting an animal, which sends an immediate warning to the following vehicles and sends a picture of the situation to their dashboards. This would give other drivers the information they need to avoid harsh braking or even crashing.

"That could have a tremendous environment and mobility benefits, because not everyone goes through the domino effect of slamming on the brakes," Bai said.

An end to traffic jams?
Researchers at Oak Ridge National Laboratory (ORNL) are developing new mathematical algorithms that will allow more vehicles and types of infrastructure to seamlessly exchange information and coordinate their actions to eliminate congestion.

Autonomous vehicles—that can benefit from V2V and V2I communication but predominantly use cameras and sensors to drive themselves—could also provide significant efficiency improvements, but they aren't as well understood.

On the one hand, autonomous vehicles could encourage more driving and more emissions because people will opt for personal transport over public transit. Furthermore, if people don't have to pay attention during their commute and can read the paper or play on their phone instead they might decide to live farther away from their workplace.

But on the other hand, autonomous cars could allow for emissions reductions by enabling more efficient driving patterns, without repeated acceleration and braking, plus vehicles traveling closer together benefit from improved aerodynamics. Autonomous vehicles could also boost public transit use by transporting people the first and last mile of their commute.

According to the Rocky Mountain Institute, widespread deployment of autonomous vehicles is inevitable within the 21st century. In a recent blog post, the research group argued that the benefits of autonomous driving would ultimately outweigh any drawbacks.

Safety benefits appeal to automakers
Nearly every major automaker, including Honda, Ford, Toyota, Nissan, BMW and Volvo, is investing in vehicle communication and automation technologies. The main motivation is research showing that as penetration of these technologies increases, so, too, will the safety benefits.

According to the Department of Transportation, vehicle-to-vehicle communication has the potential to help unimpaired drivers avoid up to 80 percent of vehicle crashes.

In February, DOT announced it would begin work on a new rule requiring V2V technology in all new vehicles. The announcement has helped focus attention and research dollars on intelligent vehicle technologies, according to Bai.

But more needs to be done to promote these technologies, particularly as their efficiency benefits become better understood, said Stepp. These technologies provide real-world benefits that policymakers should work to promote as they look to pass a long-term transportation bill next year.

Furthermore, he said, ITS technologies should be recognized for their fuel-saving benefits in DOT and U.S. EPA's fuel economy standards.

"Policymakers are still in the learning phase for some of these things," Stepp added. "Policymakers have to do what they can to help it, but stay out of the way so they don't inhibit it."