How is a warming climate impacting coral reefs? 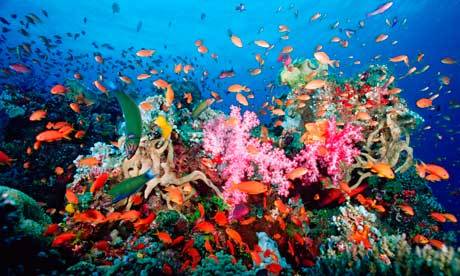 How is a warming climate impacting life in the oceans? Fish can move to cooler areas, but coral reefs are anchored in place.

Late-summer water temperatures near the Florida Keys were warmer by nearly 2 degrees Fahrenheit in the last several decades compared to a century earlier, according to a new study by the U.S. Geological Survey.

Researchers indicate that the warmer water temperatures are stressing corals and increasing the number of bleaching events, where corals become white resulting from a loss of their symbiotic algae. The corals can starve to death if the condition is prolonged.

"Our analysis shows that corals in the study areas are now regularly experiencing temperatures above 84 F during July, August and September; average temperatures that were seldom reached 120 years ago," said Ilsa Kuffner, a USGS research marine biologist and the study’s lead author. "When corals are exposed to water temperatures above 84 F they grow more slowly and, during extended exposure periods, can stop growing altogether or die."

The new analysis compares water temperatures during two time periods a century apart at two of Florida’s historic offshore lighthouses - Fowey Rocks Lighthouse, off Miami, and Carysfort Reef Lighthouse, off Key Largo, Florida. The first period included data from 1879 to 1912, while the second period spanned from 1991 to 2012. Temperatures at a third area, a reef off Islamorada, Florida, were also monitored from 1975 to 2007.

The study indicates that August is consistently the month when Florida's ocean temperatures peak. In the analysis of recent decades, average temperatures for August have been at or very close to 86 F. At Fowey Lighthouse from 1879 to 1912, the average August temperature was just 84.2 F. Temperatures this August at the same location, though not included in the study, averaged 87 F.

Coral bleaching is currently underway in the Florida Keys, highlighting the real-time impact that warmer ocean temperatures are having on reefs. Corals can recover from bleaching if the waters cool down within a few weeks, but mortality usually ensues if corals remain bleached longer than a month or two.

The study, "A century of ocean warming on Florida Keys Coral reefs: Historic in-situ observations," was recently published in the journal Estuaries and Coastsand is available via open access.