Posted by bchristo on Wednesday, 29 October 2014 in Climate Change 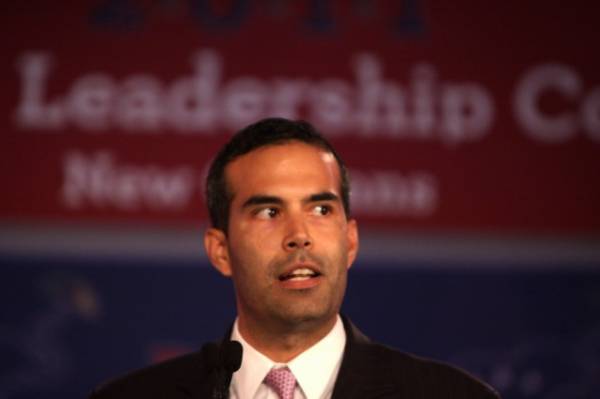 Sunday's ABC's This Week (10/26/14) profiled George P. Bush, a Texas land commissioner candidate who is a grandson and nephew of the more famous George Bushes.  It was part ofThis Week's "Closer Look" series, which seems to be intended as a place for upbeat profiles of political heavyweights. But a brief exchange about climate change showed the limits of this kind of journalism.

Given its impact on land issues, correspondent Jonathan Karl had good reason to ask Bush about climate change.

KARL: As land commissioner, he'll oversee millions of acres of oil and natural gas reserves. But he also talks about the need for renewable energy and he attempts to stake out a middle ground on climate change. Well, sort of.

How big a threat is climate change to the Texas coastline?

BUSH: The Texas coastline is impacted by rising sea levels. And again, the question is whether or not  that's man-made, and I'll leave that to the scientists. But, at least in Texas, the facts showed that on average, about 17 feet of wet beach is lost due to coastal erosion and so….

KARL: Which is a huge problem for Texas.

BUSH: It's a huge problem.

KARL: But you don't doubt that human activity contributes to climate change?

BUSH: Well, we'll see in terms of the science, there's a wide range that has been discussed. And, again, I'm not a scientist by any stretch. But everywhere from, you know, no impact at all to 100 percent.

So Bush's position is that coastal erosion is a problem linked to rising sea levels, but he's not sure that's linked to human activity.  I suspect Karl's "sort of" quip is intended as a signal to viewers, but some clarity would be helpful. The position that Bush is taking–maybe humans are causing climate change, maybe they aren't–is not a "middle ground" in any sense. It's certainly a good position to take if you don't want there to be any action to stop climate change.

This isn't the first time Karl has been able to get a Republican politician on the record on climate change. In May of this year (FAIR Blog, 5/12/14), Karl interviewed Sen. Marco Rubio (R-Fla.), who gave him a nonsensical answer to a direct question about the scientific consensus on climate change. Rubio said that "natural disasters have always existed" and that scientists were taking "a handful of decades of research and say that this is now evidence of a longer-term trend." What was Karl's response to that?

It's talk like that that Rubio hopes will appeal to the conservatives he would need to win the Republican nomination.

In Karl's worldview, it would seem, Rubio's position is one that will appeal to the conservative base. And Bush, with his more rhetorically evasive version of scientific denial, is somewhere near the "middle." Both positions, of course, are outside the overwhelming scientific consensus–which should be the most important benchmark for journalists who are describing where a politician stands on the issue.

Climate change is rarely discussed on the Sunday talk shows. It'd be nice if when they did discuss it, the conversation was less about political positioning and more reality-based.