The Plan to Map Illegal Fishing 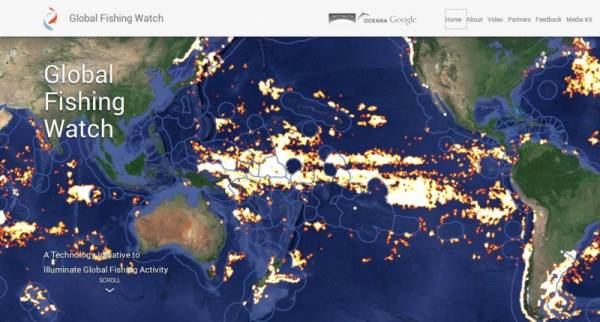 Illicit fishing goes on every day at an industrial scale. But large commercial fishers are about to get a new set of overseers: conservationists—and soon the general public—armed with space-based reconnaissance of the global fleet.

Crews on big fishing boats deploy an impressive arsenal of technology—from advanced sonars to GPS navigation and mapping systems—as they chase down prey and trawl the seabed. These tools are so effective that roughly a third of the world’s fisheries are now overharvested, and more than three-quarters of the stocks that remain have hit their sustainable limits, according to the FAO. For some species, most of the catch is unreported, unregulated, or flat-out illegal. But now environmentalists are using sophisticated technology of their own to peel away that cloak of invisibility. With satellite data fromSpaceQuest and financial and engineering support from Google, two environmental activist groups have built the first global surveillance system that can track large fishing vessels anywhere in the world.

A prototype of the system, calledGlobal Fishing Watch, was unveiled today at the IUCN World Parks Congress in Sydney. The tool makes use of Google’s mapping software and servers to display the tracks followed in 2012 and 2013 by some 25,000 ships that were either registered as large commercial fishers or were moving in ways that strongly suggest fishing activity.

The project was led by Oceana, a marine conservation advocacy group, and the software was developed by SkyTruth, a small non-profit that specializes in using remote sensing technologies to map environmentally sensitive activities such asfracking and flaring from oil and gas fields. Although the system currently displays voyages from nearly a year ago, “the plan is that we will build out a public release version that will have near-real-time data,” said Jackie Savitz, Oceana’s VP for U.S. oceans. “Then you’ll actually be able to see someone out there fishing within hours to days,” fast enough to act on the information if the fishing is happening illegally, such as in a marine protected area.

The effort got its start at a conference in February, when Savitz sat down with Paul Woods of SkyTruth and Brian Sullivan of Google’s Ocean and Earth Outreach program, and the three discovered they had all been thinking along the same lines: that the pieces were in hand to put eyes on the global fishing fleet, or at least the bigger boats out there. SpaceQuest now has four satellites in orbit that continually pick up radio transmissions that large ships send out as part of their automatic identification system (AIS), broadcasts that include a unique ID number and the vessel’s current position, speed, and heading. Each packet of data is relatively small, but the total AIS data stream is massive because it captures all kinds of boats: naval warships, supertankers, barges, even some yachts. To AIS a boat is a boat; there’s no easy way to tell which ones are fishing.

So the group turned to Analyze Corp., where data scientists teamed up with a former NOAA agent who worked for many years as an official fishery observer to develop a heuristic algorithm that synthesizes input such as rapid changes in trajectory, distances covered over the past 24 hours, long-term movements and port visits over months, and the self-declared identity and class of the boat. “It combines all that and spits out a weighted classification—essentially a probability that this vessel is fishing at this particular spot and time,” Woods said. The filter isn’t perfect, but it winnows the data significantly. From a 1-terabyte starting set of 3.7 billion AIS messages intercepted from 111,000 vessels, the system extracted 300 million data points on about 25,000 boats that looked like they were fishing.

“We were able to independently verify 3,125 of those as fishing vessels,” Woods said. He notes that the system does pick up some non-fishing activity as false positives.

Arguably more important are the false negatives. Global Fishing Watch still misses most of the activity of the so-called dark fleet: smaller fishing boats that aren’t required to use AIS, and rogue fishers who turn their radios off before they enter restricted zones.

“That is an issue, but the cool thing is the model can detect erratic AIS transmissions,” Savitz said. “If we see pings from a vessel every hour for a month, then it goes silent, but suddenly comes back on weeks later, we can pick that up and possibly trigger enforcement against them for not transmitting as they are supposed to.”

Perhaps equally important, “we think this could be a tool for positive reinforcement to reward good fishing behavior,” said Brian Sullivan, a program manager with Google’s Ocean and Earth Outreach program. “If people can pay a premium for responsibly harvested fish with confidence in the supply chain, that aligns the economic incentives in a powerful way.”

The next step is to open up use of the tool to everyone and plug it into a live stream of satellite data, so that ship tracks are current to within a few days. “The product really is not very far away from being a public platform,” Woods said. “Everything works in a web browser and on Google servers in the cloud. We could launch something publicly in a couple months if we secure funding to pay for the data feed.”

In the meantime, Oceana has begun using the tool internally to track vessels that have already been blacklisted for fishing illegally, Savitz said. “We can see vessels that appear to be fishing in protected marine areas. Government officials often know about this activity but don’t do anything about it. We’ll use the tool to shine light on this activity and produce public pressure for officials to actually do their jobs.”