Posted by jonehopp on Friday, 05 December 2014 in Forestry 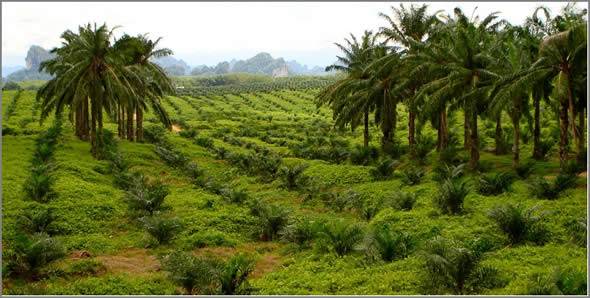 There have been a number of reports in recent months shedding light on the serious threat industrial agribusiness plantations can pose to the habitat of large mammals. Be this the gorilla, the chimpanzee, the forest elephant or numerous others. Companies may play down the threat but this cannot be a coincidence.

The damage caused by forest conversion to facilitate projects such as oil palm cultivation or rubber plantations often destroys vital habitat including key corridors that animals use.

One project in Cameroon that many organisations are strenuously trying to stop is the Herakles Farms palm oil one in the country’s South West Region. It was originally aimed at turning more than 73,000 hectares of largely dense forest into a plantation. That area is now much reduced to 20,000 hectares, but it is still located in the middle of a biodiversity hotspot.

The company attempted to shrug off its detractors by downplaying the ecological value of the area, claiming they had conducted all the necessary studies and that they were being singled out.

But when delved into only a little, startling deficiencies in the methodology and findings of those studies become apparent. It was evidently urgent that an independent study on the biodiversity and conservation value of these threatened forests with systematic assessment approaches was needed.

That’s what we at the Universities of Gӧttingen in Germany and Dschang in Cameroon, supported by Greenpeace and other organisations undertook a thorough study in 2013 of biodiversity, carbon stock and market value for the Herakles Farms project area (both the former proposed 73,000 hectares and the recently assigned smaller area). The objective was to address the High Conservation Value (HCV) subcategories 1.2 and 1.3 — threatened and endemic species of global importance — according to a best practice approach. We recently finalized the findings of our work.

While it may seem easy to say an area or another, be it a forest or something else is intrinsically of high biodiversity importance, it is truly only when you visit these areas and see for yourself the natural beauty and abundance of wildlife and appreciate what that really means.

The forests of Cameroon’s South West region are important because they represent a large portion of the largest remaining contiguous forest block of the West African biodiversity hotspot which serves as a wildlife corridor, particularly for primates and ungulates such as the chimpanzee and the forest elephant.

Through our study we encountered all threatened mammal species in the Herakles concession area that one would expect to find in the region, with some listed as facing what is called a “class A” threat under Cameroonian Wildlife Law.

One of the anomalies of our line of work is that the sight of steaming animal excrement is actually a source of excitement. Therefore we more than a little relieved when we came across traces of dung and nests that demonstrate a small family of forest elephants could be using the area as a corridor between nearby protected areas.

Studies have shown that forest elephant numbers across central Africa have steeply declined, possibly by more than 60%, during the last ten years. Vulnerable to poaching, loss of habitat would make their survival even more complicated, and such rates means the species could be heading towards extinction within the next ten years.

We also encountered rare or endangered primate species, in particular the Elliot’s chimpanzee and the drill. The latter is perhaps lesser known to the public than its more famous ape relatives in the region. That is in part due to the fact it is one of Africa’s most endangered mammals. South west Cameroon is home to an estimated 80% of the drill’s remaining habitat and indeed it is only found here and in pockets of Nigeria and Equatorial Guinea. With such a small distribution area it is vital that as much of its natural habitat is preserved as possible.

Other animals we encountered were the colourful red-capped mangabey, a rare monkey called Preuss’ red colobus, 3 species of lowland forest guenons and all sub species of the duiker – a small African antelope that is characteristic of the region where the concession area falls.

In addition to all these animals, 126 bird species were recorded, including a considerable number of large canopy species such as turacos, hornbills and parrots. Such numbers and variety are evidence of a healthy forest ecosystem. The area also harbours high numbers of tree species of conservation concern.

A vegetation survey of the area calculates that calculated total biomass carbon stocks are 19.0 GtC and 5.7 GtC for the former proposed and now issued concession area, respectively. These estimates even range above the regional mean of Central Africa. If converted to oil palm this would result in enormous carbon emissions.

Our findings demonstrate that rather than being converted into a palm oil plantation, this particular area would be better served by a concerted protection effort.

Our work also highlighted that there is an urgent and gaping need for a series of unbiased and independent studies that use systematic approaches to assess the environmental impact agribusiness projects can have on forested areas.

If not then it is highly probable that the shortcuts, oversights and environmental threats inherent in the Herakles projects, not only are being mirrored elsewhere but will continue to be at the expense of Africa’s animals and environment.