Posted by Jrramos1337 on Thursday, 11 December 2014 in Wildlife Conservation 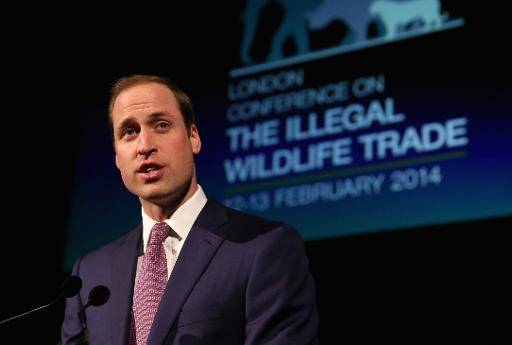 In Washington, D.C., the prince announced the formation of a royal task force to work with the transportation industry—from airlines to shipping companies—to examine its role in wildlife trafficking.

Under the auspices of the royal conservation organization United for Wildlife, the task force "will call on companies to implement a 'zero tolerance' policy towards the trade," William told a meeting of the World Bank's International Corruption Hunters Alliance. "Criminals are able to exploit weak and corrupt standards, so we must raise those standards, collectively." (Read William's full speech here.)

"It's easy to blame others for the problem—demand in Southeast Asia, not enough protection on the ground, and so on," the prince said at the evening event.

"But, if I may say, we could start with looking closer to home. Our own nations still have thriving black markets in these products, and we have to raise the game at home as well as abroad."

The prince's activism comes as many governments and nonprofits are stepping up efforts to combat wildlife trafficking, which is fueled largely by growing wealth and demand for animal parts in Asia, particularly China.

It may surprise those who have not watched the royals closely, but Prince William has been active for years in efforts to stop wildlife trafficking, chairing a high-level Feburary summit on illegal wildlife trade in London.

In February, the U.S. government announced a sweeping new strategyto confront the illegal wildlife trade, including tougher enforcement. And many countries are burning their ivory stocks during symbolic, highly publicized events in the face of an elephant poaching trend.

In his Monday remarks, the prince noted that in "China and Southeast Asia, the wholesale street price of ivory has increased from $5 to $2,100 per kilogram in 25 years. And this is reflected in increases in poaching."

"It's really amazing when a member of the royal family is willing to risk an international embarrassment to say something that's really in his heart," said John Heminway, director of the film Battle for the Elephantsand a trustee of TUSK USA, a nonprofit fighting wildlife crime.

"He's absolutely correct—there's only one way to stop this: to get the Chinese to stop."

The trafficking of African elephant ivory was outlawed worldwide in 1989 by the Convention on International Trade in Endangered Species (CITES). Elephant killings declined in the years that followed, but began rising again in 2007.

The World Wildlife Fund (WWF) estimates that the current slaughter wipes out 30,000 elephants a year. Illegal ivory now sells for $1,500 a pound. Illegal rhino horn commands a price as high as $45,000 a pound, roughly equivalent to the price of gold.

Those animal parts were a major focus of the February meeting that William chaired.

The London Declaration, which emerged from that meeting, offers practical steps to end the illegal trade in rhino horn, tiger parts, and elephant tusks that fuels criminal activity worth over $19 billion each year.

At the World Bank on Monday, William will "discuss a zero-tolerance approach to the transportation across borders of illegal wildlife parts,"according to the royal website.

"The duke will also attend a working lunch at the World Bank at which a number of programmes in support of the fight against the illegal trade in ivory will be discussed," the site says.

The London Declaration, signed by 46 countries, supports the existing international ban on commercial trade in elephant ivory and renounces the use of products within governments from species threatened with extinction. (Also see "Fighting Wildlife Crime: New U.S. Strategy Broadens Scope.")

On Monday, William noted that some transportation companies have already made strides in addressing the wildlife trade.

"Air New Zealand recently set an important precedent on the transport of wildlife parts by banning the carriage of all shark fins on its planes—whether or not it was legally obtained," he said.

He anticipates that the task force "will build on these positive developments to encourage global action to shatter the illegal wildlife trade."

Following his visit to Washington, Prince William will travel to New York  to attend a conservation reception at the British Consul General's Residence on Monday evening.

The Duke of Cambridge will join Hillary and Chelsea Clinton for a reception co-hosted by the Royal Foundation and the Clinton Foundation.

The reception recognizes conservation work carried out by Tusk and United for Wildlife partners: Wildlife Conservation Society, Conservation International, and the Nature Conservancy.

"I don't think you're going to see immediate results," around William's activism on Monday, Heminway said, "but I'm dreaming of being proven wrong."