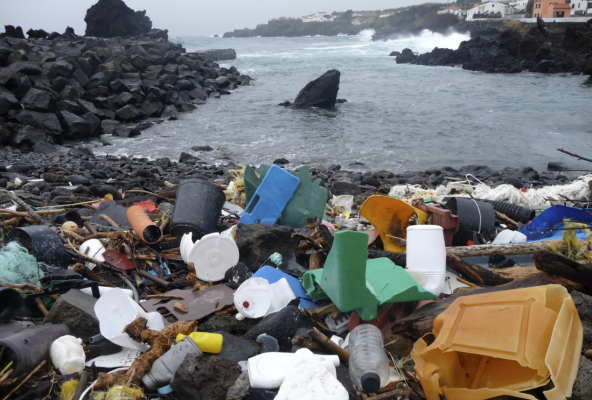 A major new study of the world's oceans has reached a shocking conclusion: Thanks to humans, there are now over 5 trillion pieces of plastic, weighing more than 250,000 tons, floating in water around the world.

With a global population of about 7.2 billion, that's nearly 700 pieces per person.

The study, published in the journal PLOS One by Marcus Eriksen of theFive Gyres Institute in Los Angeles and a large group of colleagues, is based on data from 24 separate ocean expeditions, conducted between 2007 and 2013, to sample plastic pollution. Plastic was either observed from boats, or hauled up from the ocean by nets, in 1,571 locations. The data were then used to run an ocean model to simulate the amount and distribution of plastic debris.

The result not only yielded the estimate of over 5 trillion pieces of plastic in the global ocean -- it also cast light on how plastic changes within the ocean (breaking down into smaller pieces) and circulates around the globe. Pieces between 1 millimeter and 4.75 millimeters in size were by far the most prevalent class of plastic in the ocean. However, by weight, really large pieces of plastic, greater than 200 millimeters in size, were the most significant.

"What we are witnessing in the global ocean is a growing threat of toxin-laden microplastics cycling through the entire marine ecosystem," commented lead study author Eriksen of the Five Gyres Institute. A sampling of plastic found in the South Atlantic gyre. Credit: Jody Lemmon.

Worryingly, even though there are far fewer people living in the Southern Hemisphere, the research found that its oceans have about the same amount of plastic, suggesting that winds and ocean currents may transport our trash all around the world.

The authors stress that they suspect their estimate is "highly conservative" -- there could be a lot more plastic out there than that. For as they note, there is also a "potentially massive amount of plastic present on shorelines, on the seabed, suspended in the water column, and within organisms."

In particular, the authors cite a figure from the trade group Plastics Europe, which suggests that 288 million tons of plastic are produced annually. Compared to a figure like this, the 250,ooo tons described in this study represent "only 0.1 % of the world annual production" -- again underscoring that the numbers reported in the study, large though they are, are probably a low end estimate.

In response to the new study, the American Chemistry Council, which represents U.S. plastic makers, issued a statement that highlighted the importance of recycling plastics, and that pointed to a 2011 worldwide industry statement pledging to work to reduce marine litter.

“America’s plastics makers wholeheartedly agree that littered plastics of any kind do not belong in the marine environment," the American Chemistry Council statement read in part. It later continued: "Even after plastics have fulfilled their initial purpose, these materials should be treated as valuable resources and recycled whenever possible or recovered for their energy value when they cannot."

Plastic gets into the oceans because we use it and then throw it away (properly or otherwise). For that vast majority of us, that's where our relationship with plastic ends -- we don't see what happens next. How does it end up in the oceans? Most simply, plastic bags might literally blow there. Some plastic gets deliberately dumped there. And then there's runoff: Plastic on land can wind up in the water, or flow into the oceans from rivers emptying to them.

Once in the oceans, plastic plastic breaks into smaller pieces and circulates -- traveling into five major ocean gyres, which spiral in large circles, winding the trash inward. Most famously, some of it accumulates in great Pacific ocean "garbage patches," which have particularly high plastic concentrations (however, this does not necessarily mean you will see a huge heap of trash floating on the ocean surface).

The ecological consequences ocean plastic pollution are severe -- many marine animals may not only get entangled in plastic, but may ingest this long-lasting material, thinking it is food. That's not only bad for fish, it could ultimately be bad for us. If we consume fish that have consumed plastic, then it is possible that we may ultimately end up eating plastic (or its chemical remnants) too.

So after we throw our plastic objects away, maybe we're not really done with them after all.

So what should you do? "It is imperative that the use of plastics include a 100% recovery plan, or choose 100% environmental harmlessness in your choice of material," says Eriksen. "The status quo," he adds, "is no longer acceptable."