Posted by ekeith on Monday, 19 January 2015 in Wildlife Conservation

We Should Put a Price on Saving Nature 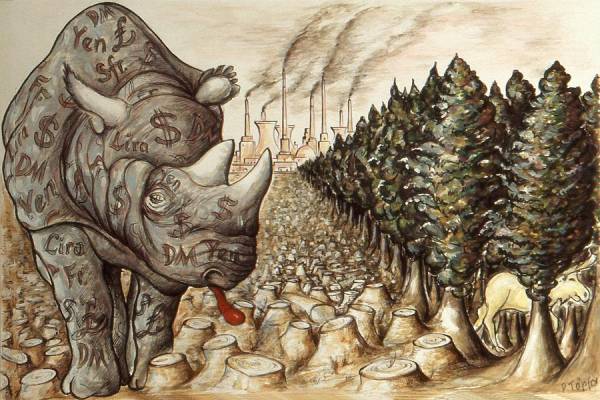 The west coast of Vancouver Island boasts the kind of wild shoreline that could swallow a kayaker for weeks. Crenellated with fjords and stippled with islands, it’s a place where old-growth stands of Doug-fir yield to rocky beaches, where black bears stalk the tidelines, and where, each March, some 20,000 gray whales cruise by en route to the Bering Sea. Yet even in this natural outpost, human enterprises clash: Cargo freighters and commercial fishermen spar over shipping lanes and fishing grounds; salmon- farmers and kayak guides struggle for control of coastal waters; -logging, mining and resort-building threaten seagrass beds.

“No one wants to go out there and wreck stuff,” Andrew Day, managing director of West Coast Aquatic, a local management board, told me. “But they disagree on the level of restriction that should be imposed to achieve different goals.” Anyone who’s taken part in a natural resource dispute will recognize the problem. How do you resolve all these conflicts?

In 2010, Day got help from the Natural Capital Project, a Stanford-based cadre of economists, biologists and software engineers whose work meets at the increasingly crowded intersection of ecology, technology and finance. NatCap was founded in 2005 in order to tackle the very quandary faced by West Coast Aquatic — how to juggle clashing human and natural values. To clear up such dilemmas, NatCap’s scientists use their diverse talents to consider a question that seems simple but is actually bafflingly complex: What is nature worth?

NatCap wasn’t the first group to address the problem. In 1997, a team of researchers pinned nature’s economic value at $33 trillion worldwide — nearly twice the global gross domestic product, or GDP. That immense value flows from ecosystem services, the natural benefits provided by everything from water-filtering shellfish to soil-forming microbes to storm-buffering reefs. The solution to ecological woes, many policymakers have concluded, lies in incorporating nature’s dollar value into decisions. Put a price on ecosystem services, the wisdom goes, and watch the polluters, over-fishers and developers fall into line.

Humans’ material reliance on the planet is undeniable, but shoehorning nature into modern capitalism makes for an uneasy fit: Our economy’s rapacity is arguably the reason we live in a time of environmental crisis in the first place. The challenge for ecosystem services, then, is to demonstrate our relationship with the natural world without letting its parts be bought and sold like scrap. To that end, as groups like NatCap are figuring out, sometimes the best way to calculate nature’s value doesn’t involve dollars after all.

The scientific literature is strewn with ecosystem appraisals. Bats provide up to $50 billion annually by eating insects; insects offer $57 billion by disposing of waste, pollinating crops and feeding fish and game. Beavers in Utah’s Escalante River watershed have the potential to provide hundreds of millions of dollars in flood control and other services. The humble street trees of Corvallis put $4 million in Oregonians’ pockets. The Colorado River Basin is worth up to $500 billion every year.

But do these astronomical figures help? In theory, sticker shock can influence hearts and minds — “a gee-whiz way to get people’s attention,” as Mary Ruckelshaus, one of NatCap’s directors, put it. Huge numbers are meant to convince folks who lack innate tree-hugging tendencies that beavers are more valuable as aquatic engineers than as, say, fur hats. In practice, however, such valuation has fostered more acrimony than consensus. To those environmentalists who keep John Muir on their nightstand, simply being a beaver — or a warbler, skink or pikeminnow — justifies protection.

“In many ways, those early dollar values did a disservice to the concept,” Ruckelshaus said. “They caused a backlash: ‘How can you put a dollar value on nature? It’s priceless, it’s sacred.’ I understand that.”

Despite such reservations, ecosystem services have graduated from a rhetorical device into a conservation tool. Denver Water and the U.S. Forest Service, for example, cut a $33 million deal to manage the forest that supplies the city’s water; the utility paid for restoration activities like dead tree removal and beetle mitigation by levying fees on customers. Bellingham, Washington, charges rate-payers to buy land around Lake Whatcom to protect their own water; Medford, Oregon, pays farmers to plant riparian trees that keep streams cool for salmon. The arrangements keep getting more creative: Ducks Unlimited recently sold 40,000 tons of carbon credits to Chevrolet, which will pay farmers not to till grasslands that store carbon and harbor waterfowl.

“When we’re talking about what the future will look like, most of the estimates that interest decision-makers have nothing to do with dollar values.”—Spencer Wood, marine ecologist

Not every market-driven conservation project is a winner, though. Take stream mitigation banking, in which restoration companies earn credits by repairing degraded streams, then sell those credits to anyone — logging companies, hotel builders, transportation departments — who expects to damage nearby habitat. The idea is that the free market will improve restoration’s efficiency. But according to Indiana University geographer Rebecca Lave, private enterprise and rivers don’t always mix. “For the market in stream credits to work, there has to be a defined commodity,” Lave told me. But unlike gold or wheat, streams are inherently dynamic — they shift channels, rearrange boulders, build islands and wash them away. That protean nature frustrates evaluation. “If a stream is changing, regulators have no way to certify whether it’s OK or not,” she said.

The result is that stream mitigation projects tend to promote stable channels — good news if you’re a government accreditor trying to create a salable unit, not so good if you hope to restore the life of a river. What’s best for the market isn’t what’s best for the watershed. “We don’t have happier, healthier streams because we have markets for them,” Lave said. “Mitigation banking has allowed the status quo to continue.”

How, then, might we better use ecosystem services for conservation? NatCap’s work with West Coast Aquatic on Vancouver Island could represent one path: a deployment of the concept that doesn’t revolve around money.

Picture Vancouver’s Lemmens Inlet, a branching, limpid bay dotted with houseboats that empty their toilets directly into the ocean. That’s a problem, because the inlet’s other inhabitants — kayakers, oyster farmers and native gatherers of wild clams — don’t exactly welcome the untreated sewage. So NatCap modeled how ecosystem services would change under two different management plans: One, a “development scenario,” in which houseboats and oyster farms increased; and the other, a “conservation scenario,” in which the inlet was zoned as a marine park. Under the conservation scenario, kayaking access would increase by more than 50 percent, and water quality by over 30 percent; under increased development, oyster harvest would rise but water quality would decline. Importantly, while NatCap’s models did affix a dollar value to shellfish harvest, benefits like clean water and kayaking opportunities were expressed using other metrics — namely, the concentration of bacteria and the extent of paddling routes.

Ecosystem services loom large in the theatre of ideas — savior to some, bogeyman to others. As practiced by NatCap, however, they’re just another factor in West Coast Aquatic’s planning process. And though ecosystem services has become synonymous with money in the popular imagination, NatCap’s clients usually aren’t interested in currency. Many Native Vancouver Islanders, for instance, regard shellfish gathering as a cultural amenity, not a pecuniary one. Slapping a price tag on it would be beside the point. “When we’re talking about what the future will look like, most of the estimates that interest decision-makers have nothing to do with dollar values,” said Spencer Wood, a marine ecologist who helped lead the project.

Ecosystem services may never be perfectly equipped to save biodiversity. Not every species is a crucial rivet holding aloft the machine of civilization: After all, forests can filter water and store carbon without any help from wolverines. But as Wood will tell you, there’s room in NatCap’s models for wildlife — as long as the folks calling the shots value its survival. Whether we rely on traditional or new forms of conservation, our ability to coexist with fellow creatures is fundamentally a matter of human will. There’s no way around it. “Just like access to clam beaches was important to them, so was having whales and eelgrass beds,” Wood said. “To me, there’s no conflict there.”

Last year, NatCap withdrew from Vancouver Island, leaving behind its models and maps for West Coast Aquatic’s use. Andrew Day and his constituents are still figuring out how they want to use all that science; inevitably, they’ve adopted some pieces and dropped others. Among the abandoned models are the black-and-white scenarios labeled “conservation” and “development.” “We want to build relationships, rather than push sectors into artificial camps,” Day said. “You can fall into a polarization trap: ‘Do we take an action out of a belief in the intrinsic value of nature, or for totally mercantile self-serving reasons?’ Well, why not use whatever motivation you can find?”