Posted by Tiny on Thursday, 22 January 2015 in Climate Change

US Senate agrees that climate change is real 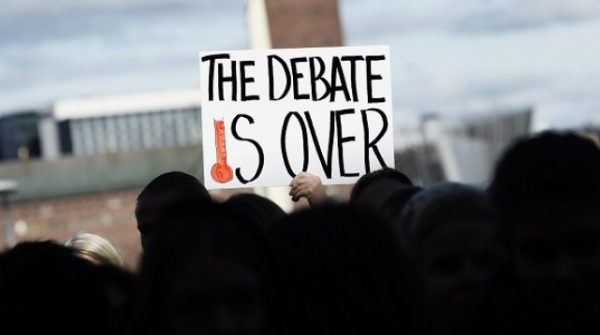 The vast majority of US senators have agreed that climate change is real, a result of a vote on Wednesday that saw 98 members of the Senate vote in favor of an amendment to the controversial Keystone XL pipeline bill that declares that climate change is "not a hoax." Only one senator, Roger Wicker (R-MS), voted against the non-binding amendment to the bill. The amendment even won support from James Inhofe (R-OK), one of the vanguard of Republican climate change deniers who had previously called the phenomenon a hoax. Inhofe voted in favor of the amendment, stating that Earth's climate has "always changed," and citing "biblical evidence" to support the theory.

Senator Barbara Boxer (D-CA), ranking Democrat on the Senate's environmental panel, called the vote "a small victory, but an important one." The Senate has gone on record to agree that climate change is real, but the governmental body is still split on its causes — other amendments introduced later in the day that attributed climate change to the actions of humans failed to receive the 60 votes required to pass, despite some Republican support. Senator Brian Schatz (D-HI), who introduced one of the failed amendments, said the vote nonetheless meant there was "a softening of the attitude of the deniers," and that they were "losing ground in the face of public opinion."

Schatz said there was "an emerging bipartisan group of people who believe that climate change is real and caused by humans and solvable," but many Republicans were staunch in their position that people have nothing to do with changing temperatures. Despite his vote, Senator Inhofe called supporters of the theory "arrogant" to believe humans were so powerful, stating that "man can't change climate." Others saw the amendments as unnecessary distractions designed to stymie the signing of the contentious Keystone XL bill. "If you're using climate change as a reason not to build this pipeline," Republican Senator Lindsey Graham said, "you're kidding yourself or you're misleading the public." Should the bill — which would see the construction of a vast oil pipeline from Canada to the United States — pass congress, President Obama has promised to veto it.