Posted by shannahlynn on Thursday, 12 February 2015 in Fossil Fuels

Will Denver Allow Fracking in its City Limits? 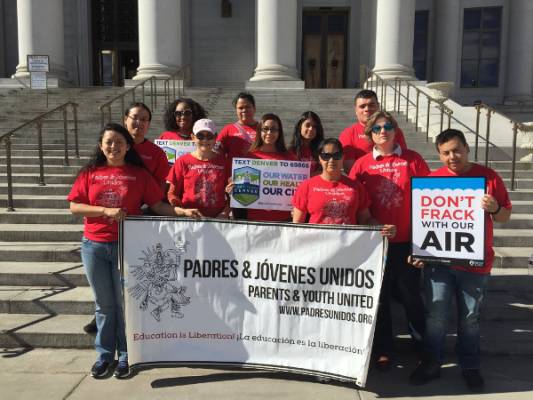 After years of local battles across the state of Colorado, the fracking debate is about to come home to roost.

On Feb. 10, a coalition of youth, businesses, community and religious leaders announced their opposition to fracking — which is currently in the planning stages not only in Denver neighborhoods, but also the plateau up in the Rockies that supplies almost 40 percent of the city’s water.

The “Don’t Frack Denver” coalition assembled on the steps of Denver City Hall on Tuesday and warned passionately about the public health dangers posed by fracking. Then, the group delivered letters to the offices of Mayor Michael Hancock and city council, calling for an immediate moratorium on fracking in the city limits. Protesters also asked local politicians for support in the fight to stop fracking upstream in the South Platte River watershed, the city’s chief source of water.

“Fracking makes Coloradans sick, drives down property values, and contaminates our public water and clean air,” said Sam Schabaker, western region director of Food and Water Watch. “Denver’s exceptional quality of life is too precious to risk: Fracking must not take place in our community or watershed.”

Themes of discrimination and environmental racism emerged as residents talked about specific sites that were targeted. The Green Valley neighborhood, which is one possible site, is one of the most ethnically diverse neighborhoods in the city. Green Valley Ranch is where Mayor Hancock hails from.

“We want to be here to put a face to the name,” said Rossina Schroeer-Santiago, there with Green Valley Families Against Fracking. “Green Valley is the mayor’s community.”

“Mayor Hancock hears their concerns loud and clear and will continue to work toward a shared goal of preserving our environment and quality of life here in Denver. The Mayor is keeping a keen eye on this issue, and eagerly anticipates the recommendations from the Governor’s Oil and Gas Task Force before any action would be considered on a municipal level.

“Understanding the Task Force is working on a responsible balance, the Mayor asks for the community and stakeholders to remain patient and allow a thoughtful process to take place.”

The upstream watershed fracking under consideration is a plan by the Bureau of Land Management to lease 250,000 acres in the South Park grasslands for drilling.

With 20 percent of the nation’s oil and gas wells, “the West is a critical point of engagement in efforts to transition fully from fossil fuels in the United States,” said the regional nonprofit Wild Earth Guardians. The “Don’t Frack Denver” coalition also included a broad spectrum of area businesses whose interests would be undercut if elected officials sided with the oil and gas industry: Denver’s vibrant breweries, outdoor recreation, tourism, kayaking companies and restaurants.

But perhaps the most direct sentiment came from legendary Colorado nature photographer John Fielder, whose gorgeous images of the state’s grandeur are on thousands of coffee table books, postcards, poster, calendars and mugs.

“Fracking … is dirty, smelly, poisonous, noisy and unsightly, and it has no place in the beautiful Mile-High City — not in the headwaters of its water supply, the South Platte, nor in any of our pristine mountain valleys.”