Posted by gibby on Wednesday, 25 February 2015 in Fossil Fuels 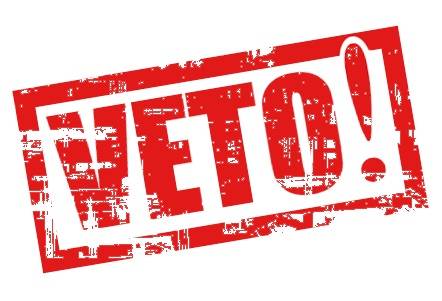 President Barack Obama vetoed the Republicans’ Keystone XL pipeline bill Tuesday, rejecting Congress’ attempt to take the project’s fate out of his hands — and leaving the GOP on track for an override vote that will most likely fail.

Obama’s veto message was delivered within hours of the legislation arriving on his desk, the latest step in six years of pushing and pulling over a Canada-to-Texas oil pipeline that has become a symbol in the debate over jobs versus the environment. Even before Obama whipped out his veto pen, Senate Majority Leader Mitch McConnell vowed to hold an override vote, which the Republican leader’s office said would occur no later than March 3.

That gives the GOP a small window to search for the Democratic votes they still need in order to push the bill past Obama. About 20 more Democratic votes in the House and four in the Senate are required to enact the bill, judging from the votes the Keystone bill got when Congress passed it last month.

In a veto message to Congress, Obama rejected the Keystone legislation as an attempt to “circumvent longstanding and proven processes for determining whether or not building and operating a cross-border pipeline serves the national interest.” The bill would have declared the pipeline approved, ending the administration’s review of the project.

“The Presidential power to veto legislation is one I take seriously,” said Obama, who was vetoing a bill for only the third time in his presidency. “But I also take seriously my responsibility to the American people.”