Posted by Cherry on Monday, 16 March 2015 in Ocean/Seas/Coastlines

Growing Coral to Save Threatened Reefs 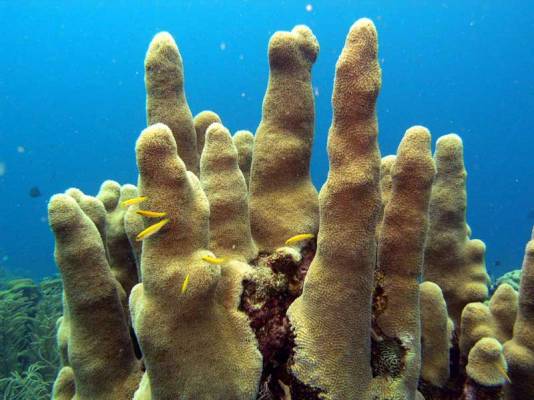 The pillar coral looks amazing when seen under Caribbean waters. It grows in clusters, forming reefs that resemble groups of smokestacks stretching up from the seafloor. Marine researcher Kristen Marhaver describes the effect as “a vertical fuzzy shag carpet.”

Pillar corals are among the corals worldwide that, despite covering only about 1 percent of the seafloor, provide homes for around a quarter of all fish species. A square mile of healthy coral reef can yield more than 20 tons of fish and other seafood, including popular snapper and grouper species. When corals are damaged or die, these fisheries shrink or disappear.

Coral reefs are also popular destinations for divers and other tourists, because unlike much of the seafloor—which appears barren, with no fish or other creatures in sight—healthy reefs are ideal places for viewing wildlife. The value of coral reefs to the Hawaiian economy is about $455 million a year; they are worth about $324 million to Florida’s economy and more than $1.16 billion to Puerto Rico’s economy, according to a 2012 report from the National Oceanic and Atmospheric Administration.

But corals are in trouble. Scientists estimate that 75 percent of the world’s coral reefs are threatened by a combination of factors including overfishing, plastic pollution, coastal development, and the impacts of climate change.

Along with these challenges, the pillar coral has an additional problem: The species grows very slowly.

So it’s big news that Marhaver and her colleagues have succeeded in growing baby pillar corals in the lab. While other coral species have been grown in laboratories, this is the first time scientists have done so with pillar corals.

“We draw the analogy to in vitro fertilization in humans,” said Marhaver, a coral reef ecologist at the Curaçao-based CARMABI Foundation and lead author of a study on the process that was published Sunday in the journal BMC Ecology. “It’s often really hard work to get each step figured out, but eventually scientists are able to get the whole process to work.”

Coaxing the corals into making babies wasn’t an easy task. Most corals are hermaphrodites that spew large amounts of eggs and sperm, but pillar corals spawn only on a few specific nights of the year and build colonies that are either all-male or all-female.

Even when pillar corals create offspring, it may be years before they begin to grow on their own, and then they grow at only about half an inch per year.

Now that they have succeeded in spawning pillar corals in the lab, the scientists can start to figure out what combination of water, bacteria, and other species creates the best environment for conserving the corals and how to transplant them back into the ocean.

Pillar corals face serious threats in the ocean, said Marhaver. Overfishing depletes the fish that would nibble algae off the reefs, she said, and too often, people walk on the delicate structures and crush them.

Marhaver also cautioned that it’s too early in the research process to know how lab-grown babies will contribute to saving pillar corals in the wild. While it may not be possible to reseed coral reefs, succeeding in the lab means that “now we’re starting to learn a lot about what nature needs to do it on her own,” she said.

Despite the challenges and uncertainties, Marhaver is hopeful about the future of coral reefs. “We do see that coral juveniles can survive in places where the adults are suffering badly, so we are thinking that some reefs can recover in places we have given up on,” she said. “We can’t write off the reefs yet.”