Posted by ekeith on Thursday, 09 April 2015 in Water Conservation

How you might be contributing to California’s water problem 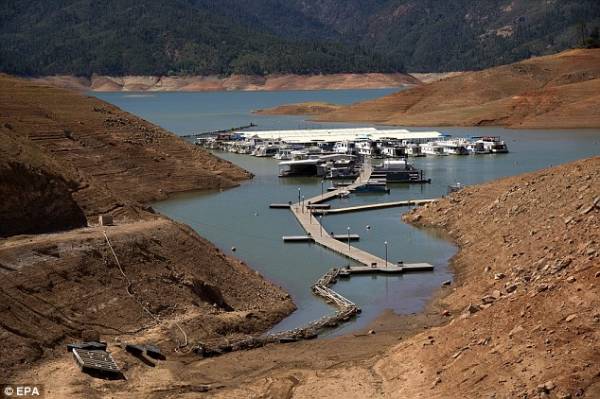 In the wake of California Gov. Jerry Brown's decision to enact mandatory restrictions on the use of water given the state's ongoing, historic drought, people nationwide have become obsessed with almonds. Not in the sense that people are buying and eating lots of almonds, mind you. In the sense that suddenly everyone with even a tenuous connection to the Internet is an expert on the water usage of various agricultural products.

Each almond, you may have heard, requires one gallon of water to grow. Which, you may also have heard, is part of the reason why agriculture uses a stunning 80 percent of California's water -- and yet was not asked by Brown to curtail its usage at all.

Here's the problem. The factoid about the almonds lacks context; a lot of other foods use much more water by weight. The one about how much water agriculture uses, meanwhile, is surprisingly subjective. Including water reserved for environmental purposes, agriculture only uses about 41 percent of the state's water. And that figure almost certainly doesn't capture what is happening on the ground in California agricultural areas over the past 24 months.

There's a city in central California about an hour southeast of Fresno called Visalia. To get there, you fly into Fresno Air Terminal, FAT, and head south on the 99, between neatly planted rows of eucalyptus trees and past several smaller farming towns, including Selma, the raisin capital of the world. The air smells like manure and dust, and, if you're like me, it will trigger your allergies. The region consistently has among the lowest air quality in America.

Visalia is in the northwest corner of Tulare County, where Mark Watte owns a farm and dairy. Watte -- whose name my phone kept autocorrecting to "water" -- has about 1,000 milk cows and grows alfalfa, corn and wheat as feed. He added pistachio trees about a decade ago and and recently, almonds. After struggling to keep up his output last year, he expects to have to cut back this year.

"It's going to be 40 to 50 percent" that won't get water, he told me by phone. "We have some crops that we just won't irrigate. Alfalfa's one of them. We'll just quit irrigating it in the summer and if we don't get water, we won't irrigate." The effect on his bottom line? He'll use what water he gets to protect his highest-value crops, like those nut trees. So he expects to see a 25 percent decrease in income.

That phrase -- "get water" -- is an important one. Watte pays for the water he uses and, in most years, controls how much he buys. When there is no water, though, he can't. And recently, there hasn't been much water.

On the east side of the Central Valley are the Sierra Nevada Mountains and Sequoia National Park. (When you disembark at FAT, you walk through an artificial forest meant to welcome visitors who plan to visit the mountains' giant redwoods.) In normal years, snow falls in the mountains in the winter and then melts during the spring and summer, collecting in rivers. One of those rivers is the Kaweah, which originates up in the mountains and then collects in a man-made lake east of Visalia. The lake was formed when the county built the Terminus Dam in the 1950s in response to flooding that swept through Visalia in the 1930s. Now, it's a key part of the region's water system.

The map below, provided by the Kaweah Delta Water Conservation District(of which Watte is vice president), shows how that water gets from the lake to the rest of the region. It's a complicated, intricate web of natural and man-made systems. Lake Kaweah and Lake Success (formed by another dam) are in the Sierra foothills. Their water flows into rivers and canals, and is then shunted into smaller waterways. Those waterways are usually ditches, owned and maintained by about 20 ditch companies, who are to agricultural water what the delivery guy is to your pizza place: The ones who get it to your door.

The dam and lake are maintained by the Army Corps of Engineers. But most of the water in the lake is the property of farmers and ditch companies, having decades ago bought storage in the lake. There's an organization comprised of the companies and some farmers, that meets in the spring and decides how and when to release water from the lake. In good years, water can flow out of the lake, into rivers, and into ditches for 60 to 90 days, from June through August. In bad years, like 2014, it's 20 days.

Normally, as I said above, snow falls in the Sierras and melts slowly to fill the lake. Thanks to the lack of snowfall in the Sierras over the winter and months of little rain on the valley floor, this year the lake could end up well below normal, perhaps only reaching 70,000 acre-feet of water. (An acre-foot is the standard unit of measurement, representing the amount of water that can cover a one acre area one foot deep.) The lake can hold 185,000 acre-feet.

Farmers pay for a certain number of acre-feet to flow into their irrigation systems, sometimes going into storage ponds, water batteries on their land. Ditch companies and government bureaus sell water to farmers, opening and closing gates to allow the proper amount to flow into their property.

Jeff Tashjian, who grows lemons and oranges on the east side of Tulare County -- and who is my brother-in-law -- has seen how the price of water has changed over the course of his two decades in the business. "I can remember when water was, 50, 60 dollars an acre-foot," he told me. The price varies by location: Farms uphill from the water source pay more, because it needs to be pumped. Farms further west from the source pay more, too, since it's more expensive to shunt it over there.

When there's less water, the law of supply and demand also kicks in. "Last year, they had a little water left over, and they were telling the farmers it was around $400 an acre-foot," said Tashjian. Farmers bought it to store, in case of emergency, like a well going dry. Then the company got hold of more water. "If you want some," he was told, "it's $1,500 an acre-foot." Buying water in hard times, in other words, can be as much as 30 times more expensive.

The preventive measures make sense. Groundwater levels had already been dropping over time, as the graph above shows. The aquifer from which water in the area is drawn has had two million acre-feet more withdrawn than it should have, according to Watte. "The only way we can pump less water is to farm less land," he said. "That's looming."

But worse drought means less water through the system of ditches and canals, which means more pumping groundwater. More pumped groundwater means wells run dry. Jeff Ritchie, who farms a wide array of crops ranging from walnuts to cotton, said that the drought is the worst he's seen. "We're having to go in and drill deeper to take the place of the ones that are dry," Ritchie told me. When the canals and rivers are flush with water after heavy rain- or snowfall, the groundwater is replenished, as is seeps into the ground. With the drought, that doesn't happen.

There's one other way in which agriculture east of Visalia gets water: The Friant-Kern Canal. It's marked on the map above, and brings water down from the Friant Dam on the San Joaquin River, past the outskirts of Visalia, and down to Bakersfield. Tashjian gets water for some of his fields from the Friant; it's the one that saw the spike in prices in 2014. Such north-south water projects are legendary for their contentiousness in California history, of course. Last year, The Atlantic thoroughly (and fascinatingly) detailed the state and history of that system.

In Tulare County, the problem is slightly more localized. For the first time ever last year, the Friant allocated zero percent of its contractually obligated water for irrigation in the area. Earlier this year, the Bureau of Reclamation announced that it expectedanother "zero allocation."

A state decision in February not to allow increased pumping for agriculturemet with protest from farmers who get water through the Friant system. State Water Resources Control Board Director Thomas Howard argued against the pumping, given the historically low population levels for certain types of fish. Which offers a nice anecdote for answering the question of how much water is used for what.

Agriculture uses 80 percent of the state's water only if you exclude water that is reserved for environmental purposes. A report from the Public Policy Institute of California (from which the graph above is derived), explains what that water is used for: "water in rivers protected as 'wild and scenic' under federal and state laws, water required for maintaining habitat within streams, water that supports wetlands within wildlife preserves, and water needed to maintain water quality for agricultural and urban use." It's everything that's not in the bottom half of the circle above. Agriculture uses far, far more water than urban areas, but it, too, has constraints.

The limitations placed on water use for environmental purposes clearly frustrated the farmers that I spoke with. In part, that's due to a long series of legal and political battles, which the farmers feel as though they usually lose. (They aren't without their allies; California Republican Carly Fiorina blamed environmentalists for the state of the drought.) But the tension is particularly sharp given recent critiques of water use by agriculture.

"We do what the rest of the world can't do so well," Watte said. "We grow processing tomatoes. Almonds. Pistachios. Table grapes. Garlic and onions. All of these things that we supply a significant amount of the nation and the world's supply. What would they rather have us do with that water?"