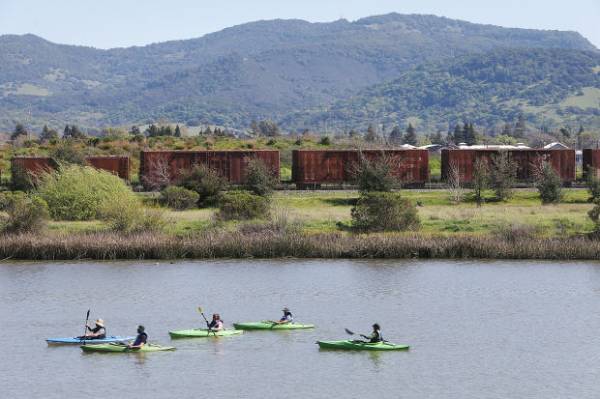 With sea levels rising, the U.S. Geological Survey Bay Area predicts the lower Napa River could see an increase of 39 inches over the next 100 years, a rise of more than 3 feet.

What this means for towns along the Napa River was the subject of a community meeting at Napa Valley College this week hosted by the League of Women Voters Napa County.

Unfortunately, the flood project still needs another $65 million worth of floodwalls and pumps — additions that the U.S. Army Corps of Engineers is currently unwilling to pay for, Thomasser said.

“There is always a struggle for federal funding for this project,” Thomasser said. “We have to sing for our supper all the time about why our project should be funded as opposed to all the other great projects in this country.”

Napa has experienced 22 “significant” floods in the past 50 years, most recently the flood of 2005, Thomasser said.

Lowe, a consultant with the San Francisco Estuary Institute, commended Napa County for its proactive approach to flood protection. While other Bay Area cities are looking for ways to combat the threat of rising waters, some agencies are only preparing for a one-foot increase in water levels, which means they will have to come up with a second strategy sooner than later as water levels continue to rise, he said.

Lowe said predictions for the future can draw on more than a century of sea level and tidal data for the Bay Area.

“We’ve measured the variations and projected what will happen as things change,” Lowe said. “The timing isn’t accurate. We don’t know when things are going to happen. We may be a decade or so off, but the trend is very clear.”

According to the Friends of the Napa River Executive Director Shari Gardener, the Napa River is one of the largest Central Coast rivers in California, spanning 50 miles from Mount St. Helena to the San Pablo Bay. The river and its 47 tributaries drain into San Pablo Bay, which blends with the San Francisco Bay before moving west out to the Pacific Ocean.

The lower Napa River rises and falls each day with the surges from San Pablo Bay that reach into north Napa.

Each town has its own situation to prepare for, but Lowe said there is no time to waste.

“Sea level rise is not all doom and gloom. There are some great ideas about how to solve some of the immediate issues, but we have to find creative ways to fund them and support them. We need to figure out how to accommodate the sea level rise, and we need to start thinking about that soon.”