Posted by katherine94 on Saturday, 25 April 2015 in Climate Change

Millions could be displaced by rising oceans by 2100 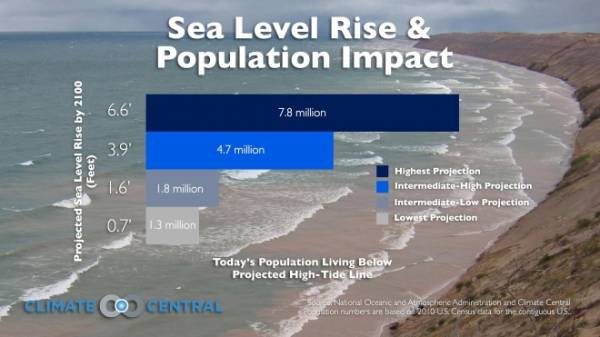 Rising seas could displace nearly 12 million people living on the coast during the next 85 years, with areas in the Southeast, including Charleston, seeing some of the most dramatic impacts, a Georgia researcher said Tuesday.

Scientists predict that oceans will rise between 3 feet and 6 feet by 2100, but researchers so far have focused mainly on which areas might see higher waters.

Left out of this equation are the number of people who could be displaced, Matt Hauer, an applied demographer at the University of Georgia, said at an international conference in North Charleston.

Hauer said he had previously worked on research on how many people in Georgia would be affected by rising seas. Once that was done, he said, the university decided to expand the project to the entire country. Among his findings:

More than 17 percent of Florida’s population will be at risk of inundation. About 350,000 South Carolinians could be affected.

Two low-lying North Carolina counties, Tyrrell and Hyde, near the Albemarle and Pamlico sounds, and Monroe County, Florida could lose 70 percent of their populations. “I have no other way to describe it other than catastrophic displacement,” he said of those places.

With its low-lying streets and flat geography, Charleston is among the vulnerable metropolitan areason the East Coast to rising ocean levels, the U.S. National Climate Assessment panel reported last year.

But Charleston is far from being alone. Hauer said he found that 292 of the country’s 3,000 counties would be affected by higher seas.

Much depends on exactly how high the waters get, a subject of vigorous debate in scientific and political arenas.

After the presentation, he said his findings have been submitted to scientific journals. He said he would release county-by-county breakdowns, estimates for South Carolina, once the study has been reviewed and published.

The price tag to protect communities against sea-level rise could be as much as $421 billion a year in infrastructure costs alone, Hauer said. It could cost an estimated $11.7 trillion to relocate people.

He pointed to efforts in New York City, Baltimore, Southeast Florida and Norfolk. The key for such preparation lies in local political leadership, Schwab said. “Without such leadership, it really doesn’t go anywhere.”

More than 345 scientists and planners from as far away as Guam and the Mariana Islands are attending the week-long conference. The Association of State Floodplain Managers is hosting the conference, and is partly sponsored by the Charleston-based National Oceanic and Atmospheric Administration’s Office for Coastal Management.