Posted by Wolf on Tuesday, 27 December 2011 in Forestry 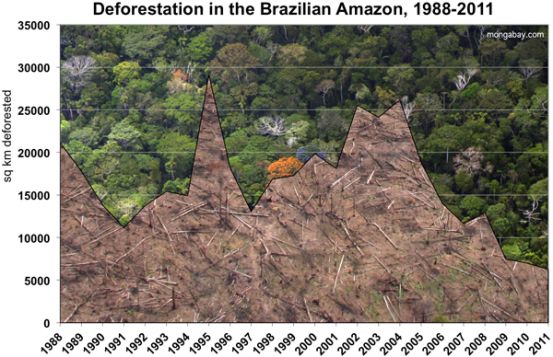 Deforestation in the Brazilian Amazon fell to the lowest level on record between August 2010 and July 2011 according to preliminary data from Brazil's National Institute of Space Research (INPE).

Forest clearing during the period amounted to 6,238 square kilometers (2,408 square miles), down about 10.9 percent from a year earlier when 7,000 square kilometers were chopped down. 78 percent of deforestation occurred in Pará, Mato Grosso, and Rondônia, the states where the bulk of agricultural expansion is concentrated.

The numbers are based on Brazil's deforestation monitoring system called PRODES, which can detect clearing in patches down to 6.25 hectares (15.4 acres). The figures are preliminary — last year's deforestation data was revised upwards 8.5 percent this past October.

The data shows deforestation continues to decline in the Brazilian Amazon, which accounts for more than 60 percent of the entire Amazon rainforest. Annual deforestation last peaked in 2003 and 2004 when more than 25,000 square kilometers of forest were destroyed in both years.

The Brazilian government says enforcement efforts, combined with conservation initiatives and sustainable development programs, have contributed to the decline, but analysts contend that macroeconomic trends, including a strong currency, which reduces profits for Brazilian commodity producers, play a bigger role. Research published in 2010 attributed 37 percent of the drop in deforestation between 2002 and 2009 in the Brazilian Amazon to new protected areas.

Brazil did not release data showing forest degradation, which can be an indicator of future deforestation.

Brazil's announcement came a day before the Senate planned to vote on a controversial bill that will revise the country's Forest Code, which limits how much forest can be cleared on private lands. The revision, which has been pushed by agroindustrial interests, would grant amnesty for past illegal deforestation (up until mid-2008), while reducing requirements for legal forest reserves and setbacks along waterways. Green groups fear the changes could spur an immediate increase in deforestation.

But another threat looms large over Earth's biggest rainforest: climate change. Scientists have repeatedly warned that higher temperatures in the tropical Atlantic will trigger rainfall shifts that leave much of the Amazon drier and more vulnerable to drought. And there are already signs these warnings should be heeded: in the past five years the Amazon experienced the two worst droughts ever recorded. Researchers say that deforestation and forest degradation will worsen the impacts of climate change by disrupting the hydrological functions of the forest. Such changes could have impacts on agricultural production in regions that currently rely on the Amazon for rainfall, including souther Brazil, Paraguay, and Argentina. Roughly 70 percent of South America's GDP is produced in areas within the rain shadow of the Amazon.